As Jocko Willink says “all excuses are lies.” Therefore, health issues aside, someone not being able to train because of the coronavirus is not only an excuse, but also a lie. When the current pandemic presented itself I knew right away that school and training had a high probability of being postponed or canceled. So the final eight weeks of our season would go down the drain if we were unable to find a way to keep the routine going by some means. So I put together a three-pronged approach to supporting my athletes. Below are examples of a typical workout (option 1), a substitute workout (option 2), and a workout with no tools (option 3).

Redefining the warm up

Before we dive into training, let’s discuss warming up. My standard approach for warming up uses many different tools such as hurdles, medicine balls, mini bands, weights, and more. During the current pandemic, many athletes might not have any of these tools at their disposal. So warming up in this scenario has been modified to focus on a variety of locomotor movements, such as those cataloged our movement library: marching, lunging, crawling, scorpions, eagles, skipping with various intensities and heights that include arm movement, and other movements that work on flexibility, coordination, athleticism, and kinesthetic awareness. 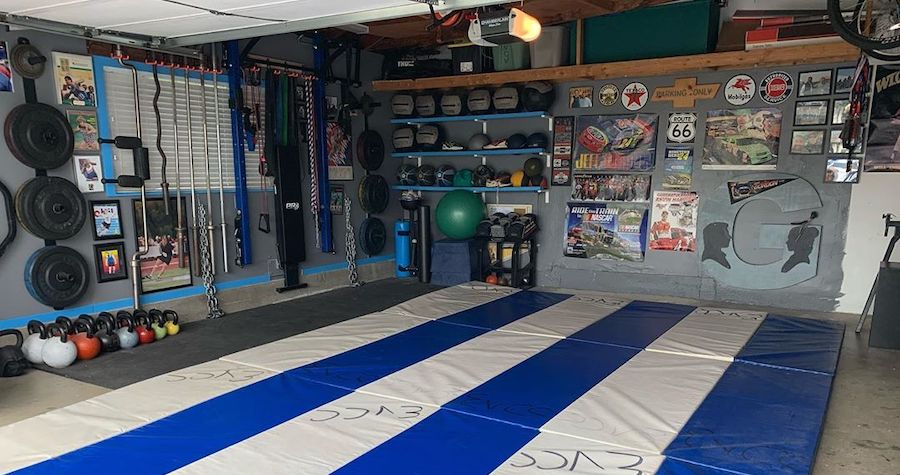 Option 1 assumes that you have access to everything or almost everything you need to train. For these athletes I obviously sent out the training plan that was going to be done the next 4 weeks. Same movements, volume, intensity etc. This is a perfect case scenario. However, while I and other coaches might have a great home gym setup, the large majority of kids don’t have this situation, and everyday it is less. Therefore, I created options 2 and 3.

Option 2 is primarily based on doing the same movement patterns as Option 1 but using either kettlebells or dumbbells. Many athletes have some weights around the house they can use, or can quickly buy a few dumbbells at a local sporting goods store. The objective would be to keep the same volume and intensity that was originally going to be assigned but performing the movements using alternate equipment.

Sometimes exercises have to be modified slight to fit the different implements. For example, we will substitute the clean with dumbbell jump shrug, dumbbell high pull, or dumbbell 1-arm snatch.

Hex bar deadlifts would be substituted with kettlebell suitcase deadlifts, or sumo deadlifts holding a kettlebell.

Finally, jammer press would be substituted with dumbbell push press or a dumbbell version of Nieder press.

The list can go on and on but these core lifts are what I wanted to focus on. Here is an example of how a program could be adapted with an Option 1 and Option 2.

Now this brings us to another scenario. What if the athletes don’t have any equipment or no options.

Option 3 takes into account the possibility that the athletes have nothing to train with: no dumbbells, no kettlebells, and no barbells. At the very least it would be great to have a 4-kilogram medicine ball, but even then this may be a stretch. This is the worst case scenario!! No Problem. Despite this, we still have some options.

For lower body movements I assigned leg circuits. Everything is done with bodyweight and you can find a bench at a park to do step ups with. One day would be a normal or sagittal based leg circuit and 2 days later we would do a lateral leg circuit.

Let’s not forget about core work. It can still be done on all three planes of movement regardless of what scenario you or your athlete may be in.