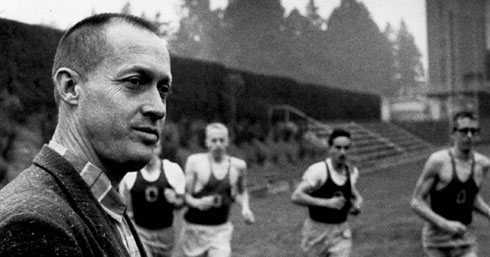 I have been thinking lately on who and what shaped and influenced my ideas over the years. It has been a process of searching for knowledge to get better at getting better. These reflections make me realize how fortunate I have been in my life to be in the right place at the right time. The foundations for this journey was laid by my parents and the education I received in parochial elementary and high school where we were taught to think. It goes without saying that the athletes and colleagues I have been able to work with were also a constant source of learning for me.

Theory of Track & Field class at Fresno State senior year spring of 1968 taught by Red Estes, who was assistant track coach at Fresno State. We had to show proficiency in each event and develop a training program for each event. The textbook was Modern Track & Field by Ken Doherty. Red lent me all the back issues Track Technique and Run/Run/Run by Fred Wilt which set me on the right path.

Fresno State Track & Field Clinic, January 1968 with Bill Bowerman, University of Oregon and Ken Shannon, assistant coach at UCLA. What a way to start a career. After hearing these two coaches for two days there was no doubt in my mind that I would be a track coach. Fifty plus year later I can close my eyes and hear Bowerman’s words and see Shannon film of pole vault training.

Theory of Basketball class at Fresno State senior year spring of 1968 taught by head coach, Ed Gregory. Coach Gregory went on the scout for many years with the Warriors. We had to scout and prepare a scouting report on a high school game and college game. I chose Fresno city college versus Pasadena City College coached by Jerry Tarkanian. After that game my head was spinning watching the speed that Pasadena played and their tenacious 1:2:2 zone defense. A preview of thing to come at UNLV years later. We also had to develop our own training system and playbook

Foundations of Conditioning fall 1968 at UCSB. The class was taught by Sherm Button. Our class project was a year long training program for your sport. It really forced me analyze and think why I was doing what I was doing. I still have it.  Sherm was a great teacher and a mentor for me.

MTSAC Track & Field Clinic February 1970. This was an annual clinic attended by over 300 coaches. This was the first time I heard Tom Tellez speak; I became a disciple. He recommended two books that really opened my eyes – Mechanics of Athletics by Geoff Dyson and Science of Swimming by Doc Councilman. Arne Nytro, from Norway coach of Terje Pedersen, first man to throw 300’ in Javelin, he also spoke on distance training also presented. He was a generalist, which left a huge impression on me and forged my philosophy of specializing in being generalist.

1972 Olympic Trials and Clinic. During the Olympic Trials each morning there was a clinic on all the events presented by top coaches. A chance to network and meet other coaches and share ideas.

July 1972 AAU Learn by Doing Clinic in Sacramento. Organized by Fred Wilt. It lasted six days beginning at 8:00 in the morning going until 9:00 at night. The days were devoted to learning by doing at stations taught by top coaches. Evenings consisted of lectures, the first two nights were by Tom Ecker on biomechanics and last three nights by Tadeusz Starzynski, coach of Joseph Schmidt two-time gold medal winner in triple jump. His lectures were two hours with simultaneous translation from polish. They were amazing, extensive use of 16mm film of training exercises. No heavy weights, a lot of what a we today call coordination. Really opened my eyes. In addition, the interaction with the coaches who attended was tremendous. It was a who’s who of anybody and everybody who did anything in coaching for the next forty years.

Track & Field Omnibook by Ken Doherty – First Edition. This was an update on his previous books all assembled under one cover. I still go back through this book once a year. It is so rich in information that is timeless.

Grad School at Stanford 1973-74 was in many ways a dream come true. Just to be at Stanford and the people that was able to access was amazing. There was also a dance master’s program and having classes with them opened my eyes to new vistas in movement, all of sudden rhythm and tempo became part of my coaching repertoire. In addition, I coached the jumps and decathlon. I don’t know if it was an aha ha or aha shit moment before the first meet when I realized that a year before I was coaching La Cumbre Junior High School and now I was coaching in the Pac Eight.

UC Berkeley Exercise Physiology seminar in January 1974. The speakers were a who’s who of anybody who had done anything of significance in exercise physiology to the that time. The headline presenter was Per Olaf Astrand, a true iconic figure in the field. Needless to say, it was eye opening, educational and challenging. There were over three hundred people there, only a handful of whom were coaches. I felt it gave me an edge in training my athletes because I had learned cutting edge information from the best.

1976 Olympic Games – I was able to attend the Montreal games. I got there a few days before the start of track and field. I would go to the practice/warm-up track, arrive at 7:30 am and leave at 7:00 pm. I did not want to miss anything. It was an education. Seeing Juantorena go through a session. Seeing the East Germans for the first time. Trying to hear what the coaches were saying. It was an unforgettable and formative experience for me. You can learn so much by watching.

1978 I became editor of Track Technique, at the time the premier technical journal in track and field. This gave me access to a worldwide network of coaches, athletes and scientists. The information that I received was priceless. Some was published in Track Technique, but much was material I used in my coaching and is still in my library. I was able to get TAC to make Track Technique the National Governing body technical journal. I was removed for the editorship because of my outspoken stance of the drug abuse in track & field.

Shriners Hospital in San Francisco biomechanics lab with John Hagy. From 1977 to 81 I got exposed to film analysis, EMG and use of force platform. Was able to do research on my athletes as they were used as “normal” subjects in some landmark gait studies.

Visit with Tom Tellez at University of Houston in January 1982. After a conversation at a convention in December Tom invited to spend three days in Houston. During those three days he took me through his technical model for every event. We studied film of each event. He went through cues for each event. We probably spent twelve hours a day going over every detail. I watched workouts with Carl Lewis and Tom talked me through what they were doing. It was an education. It got me back on a simpler path, I was making things too complicated and confusing my athletes. My athletes saw immediate progress from the lessons I learned. As a team we finished second at nationals and had two individual national champions. I still apply the lessons I learned then.

Project Gold leading into 1984 Olympic Games. Worked with Anne “Betty” Attwater and Ralph Mann on biomechanical analysis of sprints and hurdles. During this project getting to know Mel Rosen, Coach at Auburn and Ed Temple coach of the famous Tigerbelles and listen them talk about sprinting and training was a priceless experience. They weren’t the loudest voices in the room, but when they spoke you listened. They may not have been scientific, but they were oh so wise.

Meeting Dr. Lois Klatt head of performance lab Concordia University in River Forest Illinois. A lady way ahead of here time. Lois made me understand three planes of motion and importance of training movements not muscles and multi joint actions. The work with her was a seminal moment in my career. I now looked at movement, training and rehab with new eyes.

ASMI Pitching research with Dr Chuck Dillman and later with Glen Fleisig. I had known Chuck from when he was with USOC. It was very special experience to be on the ground floor of this research. Chuck came and met with our pitching coaches (White Sox) and asked them what they needed to know. That was why he was such a special sport scientist, His approach spoiled me. We are able to have the majority of our pitchers from 1987 to 1996 filmed and analyzed during my time with the White Sox. It helped me to clearly define what we needed to do in training. We had significant reduction in injuries as a result.

Starting Building & Rebuilding the Athlete seminar in 1992. Putting everything together in a systematic manner that I could teach in a sixteen-hour seminar. I taught this periodically until spring of 2005

First visit to Australia 1996 and the AIS in its heyday and John Pryor and Mark Andrews at Sydney academy of sport. Subsequently I have been to Australia thirteen more times and each trip has been an amazing learning experience working with great coaches and applied sport scientists.

Starting GAIN in 2007. GAIN is a community of professionals for professional development. At this stage of my career this now become my focus. It is an incredible learning community that inspires me every day and challenges me to keep learning and leading. If you have a passion for leaning, please join us https://thegainnetwork.com/

These represent the highlights. Every day for me the process of learning continues.