Every month we take a deep dive into the latest research in sports science. Coaches often turn to other fields to learn from and a recent trend is looking at the military. To start off this month’s edition we break down some of the key topics the US military is looking at in terms of enhancing performance. Then we look at athlete leadership, parental priorities for athletes, bias in injury prevention strategies, LTAD, and more. 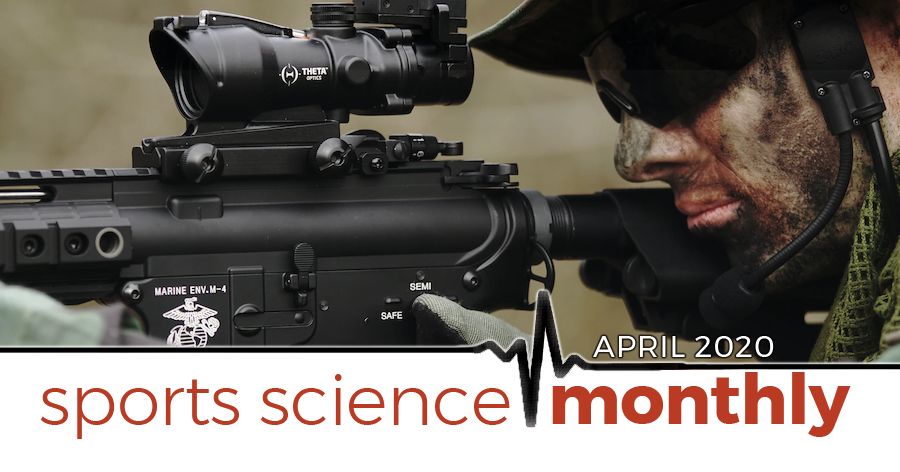 US military strategies for enhancing performance

» Quick summary: Military personnel have to maintain physical and psychological function under extreme pressure and fatigue in highly challenging environments. In recent years, they’ve taken an active interest in how a variety of innovations might support the performance of their “athletes,” the findings of which might be transferable to sport.

Sporting teams and organizations have recently become increasingly interested in borrowing from other domains aspects that might be used to enhance their own, and their athletes’, performance. Historically, this has perhaps been viewing strategies and techniques from other sports, and attempting to make them relevant in other sports, but over the last 5-10 years there has been further interest in learning key lessons from the business world—such as leadership and talent management—and attempting to make them relevant within sporting contexts. Even more recently, some sporting organizations have focused on the military, for obvious reasons; in many cases, front line military personnel and special forces are highly tuned and expertly trained performers, who undertake their roles under immense pressure, in often extreme environments, whilst needing to maintain performance over extended durations. As a result, sports are tending to lean towards understanding what they can learn from the military in these areas, but, in addition the military are typically becoming more aware of the need for innovations that support the performance of their own “athletes”. Given the potential two-way nature of this relationship, the Australian Institute of Sport has, over the last couple of years, run a “Gold Medal Ready” scheme, applying cutting-edge sports science techniques to the military, and in return, borrowing strategies the military use in developing the psychological skills to best tolerate pressure.

One key paper this month expands on this concept, providing a review on what the US army research around cognitive enhancement suggests might be fruitful avenues for future exploration. The main goal of many of the various research projects run by the army are aimed at helping individuals and teams maintain peak performance in the face of environmental and/or task-related pressures in unpredictable environments, and, where possible, enhance an individual’s level of performance. Generally, these technologies and methods can be split into two different buckets; direct methods, which target the structures or mechanisms that immediately drive a variety of psychological processes, including learning, perception, emotion, or cognition. Conversely, indirect methods target the same systems, structures, and mechanisms, but through related (i.e. non-direct) methods. As an example, a direct method to enhance performance might be brain stimulation via electrical currents, whilst an indirect approach would be the use of caffeine.

In terms of direct methods, the US Army has developed three methods to enhance cognitive performance. The first is targeted training, defined as training which targets domain-specific abilities; in the military’s case, this could be firing a weapon at night whilst on the move. The Army clearly has an interest in getting soldiers to develop this skill quickly, and to a high level. As a result, they’ve developed training and learning experiences that have high amounts of real-world emulation and simulation, allowing the soldiers to develop their skills within the context they need to utilize them, increasing ecological validity. This is clearly hugely important within sporting contexts, and I’ve written about this previously here. They’ve also begun to utilize a variety of biofeedback methods, including eye-tracking, to identify errors in cognition and perception in their recruits and then correct those deficiencies.

The military also have an interest in non-invasive brain stimulation, typically mediated through transcranial direct current stimulation (tDCS)—which I’ve written about frequently in these monthly round ups—and it’s relative, transcranial alternating current stimulation (tACS). Research from the US Army suggests these methods may enhance learning through improving cognitive control and memory, and may also improve skills such as map reading. The main challenges facing the Army in this research is a lack of long-term studies demonstrating how safe this technology is for use, and variability in how much individuals improve with its use. Finally, in terms of direct interventions, the military are utilizing reality augmentation; for example, a system of cameras based on the helmet of a soldier may be able to detect human movement behind and to the side of them, allowing the soldier to be more aware of their surroundings and be able to detect threats sooner.

In terms of indirect enhancement, there a number of key areas the military are focusing on. Firstly, they have an interest in nutritional interventions. The military are actually a rich source of historical caffeine research, which makes sense considering that many of their soldiers have to perform under states of extreme sleep deprivation and/or fatigue. They also have an interest in other stimulants, such as nicotine and modafinil, which are less well accepted in sport from an ethical and legal standpoint. Nevertheless, future research in this area may assist us in understanding how to better utilize psychostimulants as a way of enhancing athlete performance. Interestingly, the military are also interested in understanding how the gut microbiome influences psychological performance via the gut-brain axis. This has been briefly explored in sporting contexts, but the military appear to be leading the way here, and will hopefully be able to enhance our understanding of how intakes of various foods may influence cognitive function – something that will no doubt be of great interest within elite sport.

The US Army also has an active research arm exploring sleep optimization. Given that we are in no doubt of sleep’s importance, it makes sense for the army—whose soldiers often get little sleep, and the sleep they do get is accumulated in stressful and uncomfortable situations—to explore how to optimize the little sleep their troops do get. This includes the use of supplements, such as melatonin, and stimulants, such as caffeine and extreme bright light in combination. They’ve also begun to explore the use of tACS (detailed above) in combination with sleep, finding that it has the potential to improv restorative sleep.

In terms of future innovations, the article discusses that the US Army is seeking to better understand the interaction of these various technologies; can they be stacked together to improve outcomes, or is there an interference effect between them all? Can nutritional and training interventions be personalized so as to improve outcomes for individual soldiers or athletes? How will AI enhance the training capabilities of the military (something that I’ve previously written about in sport)?

Overall, I found this article really stimulated my interest in how we within sport might be able to better learn from other domains in order to enhance the performance of our athletes. Given that soldiers have to perform at a high level under extreme conditions, the military is an obvious place to start, and I’ll be watching with interest both how this research develops, and how the military applies sports science principles to its own contexts, which promises to further expand our own learnings.