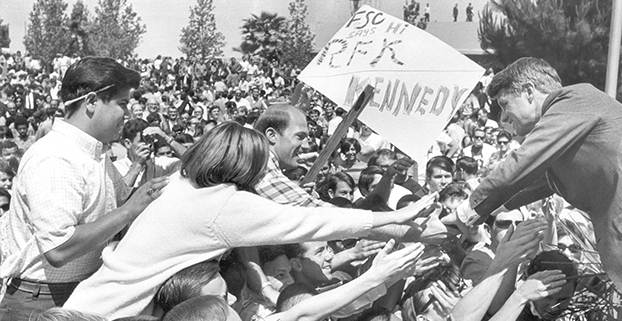 It was spring 1968. I was a young idealistic 21-year-old student at Fresno State in the second semester of my senior year. I was a social science major. The Fresno community and Fresno State were very conservative, in many ways isolated and insulated from the turmoil that was growing in spring of 1968. There were no protests. Fraternities and sororities were big.

Spring semester I took one of the last courses to complete my major, US History 1898 to Present. The professor was a great teacher. He was Canadian, I mention that because on the first day of class he said he would present a different perspective on US history, and he did. First, he started at the present and worked back. Essentially, he started in 1966. That was different. He traced the origins of what was happening in 1966 back to events and people thirty, forty, fifty years before. It was refreshing. The required readings were the longest I had for any course I had, including courses in graduate school.

We studied JFK’s presidency during the second week of the course. My generation put JFK was on a very high pedestal. By the end of that week, after looking at what he actually did, I was shaken. It was clear that without LBJ pushing legislation through posthumously, JFK really accomplished very little. Talk about bursting my bubble.

This was all before the assassination of MLK and the subsequent protest and unrest. It was before LBJ decided not to run for another term. Subsequent to those events RFK threw his hat in the ring for the Democratic nomination for president. In light of what I had just learned in class there was no way I would support him. He was scheduled to speak at Fresno State in late April. The venue was outdoors at the amphitheater where I had heard Cesar Chavez the year before. It was packed. The standing room only crowd was loud and there was electricity and expectation in the air. I was skeptical. He started to speak. It was as if he was talking to me. His words were inspiring. This was not JFK; he was different than his brother, he was a man born in privilege who understood the needs of all Americans. I left the rally, having made the decision to vote for him. I thought he would make a difference, get us out of the war and continue LBJ’s programs to improve education and bring about income equality. 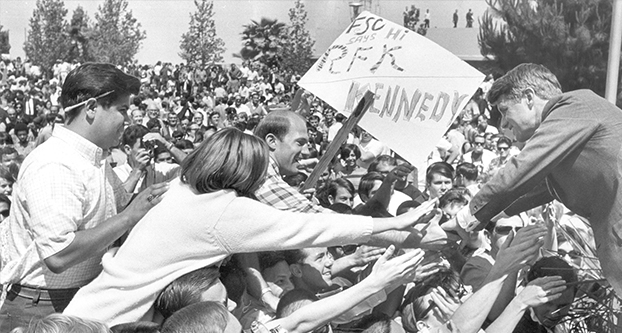 On June 5, 1968 I voted for the first time in the California Presidential primary. I voted for RFK. I was so excited to have the opportunity to vote; you could not vote until you were 21 in those days. The next day was my last final and then I would head home to start my summer job and go to UCSB to get my California teaching credential and change the world. I finished studying for my final at about 11:15 PM. I went out to the living room in my apartment and turned on the TV just in time to see RFK give his victory speed. It was exciting, a big step forward toward the nomination to win the California delegation. You know the story, only minutes later he was killed. I sat there and cried. How could this happen? He was a good man who offered hope. Well you the rest of the story, the Chicago convention and we got Nixon.

The last 52 years there have been highs and lows. The ideals and inspiration that RFK ignited in me has never diminished. We live in a great country that has serious systemic problems regarding race and income inequality. I sincerely believe that we have our future in our hands right now. We have a superpower bestowed upon us by our founding fathers – it is the vote! We all need to vote, to get others to register and vote. We need to fight those who would disfranchise citizens. If we vote and make wise choices, we can direct our country on a positive path. Please just vote and we have a chance.

The vote is the single most powerful tool we have as citizens, let’s use it.