Every month we take a deep dive into the latest research in sports science. In the August edition we start off looking at some lessons we can learn from a recent editorial giving an elite athlete’s perspective on training and load management. We also look at the modern consensus on hamstring injury risk, coaching resilience, how the athlete biological passport has impacted performance, team comedians, and more. 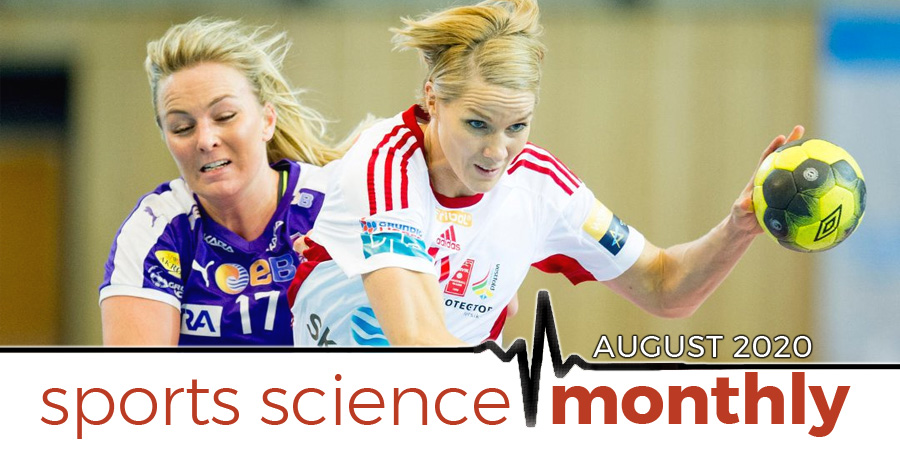 Lessons from the athlete’s story

» Quick summary: By driving the message that elite athletes need to be “tough”, we potentially cause them to stay silent when they should be speaking up over issues such as soreness, pain, and injury. Here, a former elite athlete lifts the lid on her reflections of how this toughness culture can damage athletes, both in terms of acute performance and long-term health and wellbeing.

Gro Hammerseng-Edin is a former handball player. In 2007, she was voted the female World Handball Player of the Year. At the 2008 Olympic Games, she won the gold medal with Norway, and, over her career, she won two World Championships silvers and three European Championships gold medals. She had a long, and, by all accounts, a successful career, retiring in 2017 at the age of 37.

Hammerseng-Edin is also now a published scientific author; her recent editorial, published in the Journal of Orthopaedic and Sports Physical Therapy, details the dark side of elite sport, something that I think it is crucial we take a closer look at. The crux of the article is that the total load on elite athletes is high, and, in Hammerseng-Edin’s opinion, too high. The reasons for this high total load are the frequency and intensity of both matches and training, along with travel associated with those matches; sponsor assignments; and media pressure. Hammerseng-Edin’s writing style is punchy and to the point, so, instead of parroting her argument, I’ll instead pull out some key quotes:

I think those quotes, from the pen of a truly elite athlete, make for sobering reading. Highly motivated athletes, in a team/group culture that promotes toughness, cannot make rational decisions about their need for rest and recovery. So what’s the solution? Hammerseng-Edin writes that communication between athlete and sports medicine team is key; the athlete has to be able to be open and honest with them, without the fear of perceived penalties from coaching staff or teammates.

Coaches, too, need to take responsibility for the health of their athletes, including knowing when to pay attention to the athlete’s load, protecting the athletes from increased sporting and non-sporting pressure, and working in a collaborative manner with the athlete and sports medicine team.

Finally, Hammerseng-Edin states that “a culture shift will only happen if athletes fight for it.” To that end, athletes should (1) view recovery, sleep, nutrition and injury prevention as equally important as technical or physical training; (2) recognise their professional duty to regulate their load; and (3) support and applaud athletes who make choices leading to a healthier life.

To me, this is a crucial article, with hugely important points, from the mouth of a strong role model. Athletes often need protecting from themselves; a culture and shared language shift can assist in this protection, as can an increased emphasis on making the right performance-related decisions. This isn’t about athletes being soft—there is still a time for grit—but rather on preserving their performance over time, and, eventually, reaching greater heights. I think that’s an important message for us all.