Every month we take a deep dive into the latest research in sports science. In the September edition we start off looking how wind affects sprinter performance. We then look at countermovement jump ability of sprinters, interpreting statistics, cannabidiol, bullsh*t, and more. 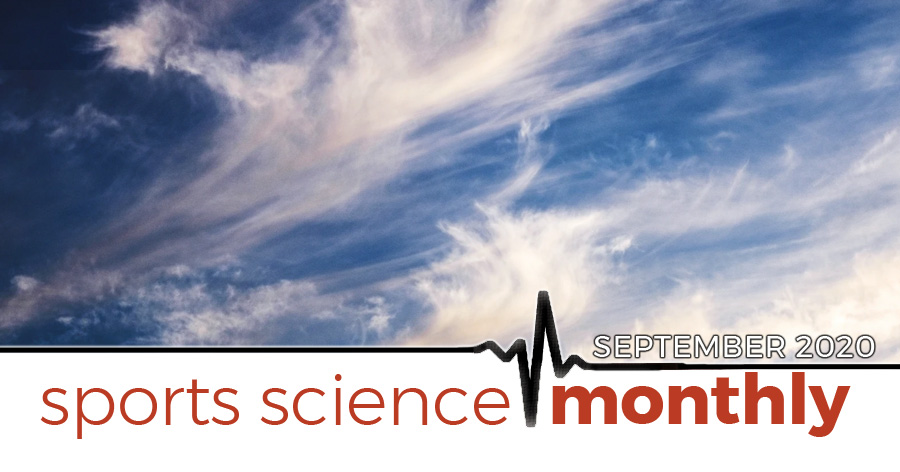 The influence of wind speed on athletics performance

» Quick summary: Environmental conditions can have a huge effect on sporting performance, and nowhere is this clearer than the influence of head- and tail-winds on sprint and jump performances. Mathematical modeling can assist is in better understanding the “true” performance, which means we can more accurately evaluate how athletes are progressing. A recent paper provides some relatively straight forward adjustments we can make to wind-affected performances, which will likely prove very useful to coaches.

When I was an athlete, I was often frustrated by wind speeds and how they influenced my performance; in 2009, for example, I ran 10.08 seconds, which would have been a personal best were it not for the following wind of +2.1 m/s, which was just above the legal limit (although, full disclosure, I still claim this as my personal best when talking with non-athletics people). That same year, I won the B race at the Aviva British Grand Prix in 10.32 seconds, which I ran into a -2.4 m/s headwind; similarly, in 2008, I ran 10.26 into a -3.6 m/s headwind in Madrid. When analyzing these performances, it’s difficult to know just how good they were, which means that it is hard to evaluate whether my training and race plan was effective.

This is a common problem within track and field, where events that are subject to wind assistance (100m, 200m, sprint hurdles, long and triple jump) often have wide variation in performance within athletes based on the wind conditions of the competition. This adds a challenge to my day job, where I’m interested in understanding long term performance trends across years and championships; how can I compare the women’s LJ final from the 2012 World Under-20 Championships—in which the majority of performances were wind-assisted—with the 2014 edition, where performances were wind legal?

In trying to answer this question, I recently came across a slightly older paper, published in the European Journal of Sports Science in 2018. The authors start with a subtlety different premise from me and my purposes; they want to develop a method whereby all performances can be adjusted for wind speed, meaning that wind-assisted performances would technically be allowed for record and qualification purposes, provided the wind-corrected performance exceeded the previous record or qualification mark. They even recommend rankings lists be corrected for wind speed, which would certainly make things more accurate, but again is a step beyond what I’m after.

To develop their model, the authors explored data from all track and field events in which wind speed is collected (previous studies had focused just on the 100m). Data was taken from national and regional competitions in Belgium and the Netherlands, along with the Diamond League. The authors also placed athletes into 12 equally sized blocks based on their performance level; this was important, because previous research has suggested that wind speed has a smaller effect on performances of a higher standard.

From this, we can see that headwinds harm performance to a greater extent than tailwinds assist performance. If you want to model these performances yourself, you can. For the 100m, the equation is:

In addition, the relationship between wind speed and performance assistance was found to be quadratic; this means that the relative effect of wind speed becomes smaller as the speed of the wind increases. For example, a +4.0 m/s wind does not improve performance twice as much as a +2.0 m/s wind. In addition, and only in the 100m, the performance level of the sprinter was related to the effects of wind speed on performance, with faster runners being less affected. These results, and the formulae provided, are all very interesting, and an important step in allowing us to better understand the influence of wind speed on performance. By better understanding these effects, we are able to better evaluate our performance (or that of our athletes), compare between our own performances across or between seasons, and also compare our performance against that of our competitors, in an overall much fairer way—which will hopefully support better performance reviews.