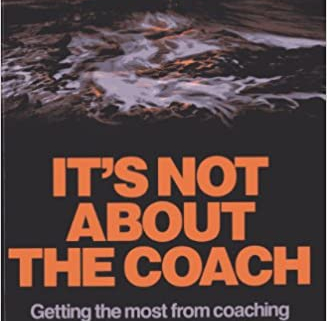 When it comes to coach development, we often pay attention to increasing the capability of a given coach across a variety of domains—most commonly, technical, inter-, and intra-personal knowledge. As such, our belief is that, by making coaches more skilled and knowledgeable, we can improve the outcome for the athlete; better coaches mean better athletes.

This month on HMMR Media we have been exploring just that topic. To close off the month it is also helpful to look at the limitations of this approach: as much as we think the coach is the key to an athlete’s success, often that just isn’t the case. A coach is nothing without an athlete, and developing key capacities of the athlete can help the coach become more effective.

It’s not about the coach

In the book It’s Not About the Coach, Stuart Haden issues an important reminder of something that I think is often forgotten—at least by me. In any coaching relationship, there are two people; the coach, and the person being coached—the coachee. In sport, this coaching relationship is often the coach and athlete; in business, it might be manager and subordinate. The role of the coach in this relationship is well established and understood; support the person being coached in their development. This can take many forms; the application of various methods that drive improvement, asking questions to promote learning, listening and observing to provide feedback—all common behaviors and areas of competency for a coach. But what role does the person being coached play in all of this?

Haden’s model of coaching has four key areas of concern:

The coach has to understand the unique contexts of the coachee, and develop a connection with them, in order to support their development. The key point in Haden’s book is that we typically spend the majority of our time focusing on developing the coach, but this person only represents 50% of the coach—coachee relationship. Instead, to further increase the effectiveness of coaching, we must focus on developing the capacity of the coachee to be coached.

This isn’t that new a concept; often, it’s termed coachability. What I think is different, from Haden’s explanation, is whose responsibility it is for the coachee to be able to be coached effectively. Typically in conversations about coachability, we see the concept used to describe athletes who are uncoachable—i.e., the athlete isn’t receptive to the advice of the coach. Athletes are urged to be coachable, but this is generally poorly defined, and, where athletes are deemed to be uncoachable, this is often viewed as the fault of the athlete, not the coach.

But what if the athlete doesn’t understand what it means to be coachable? Who could blame them, given how poorly defined it is? If an athlete had a technical flaw that needed rectifying, we would coach them in order to improve; why don’t we do the same for athletes perceived to be uncoachable.

Haden’s belief is that improving the ability of the coachee to be coached is something that needs to be actively developed and supported by the coach themselves. To do this, he writes, coaches must define the values required to be an effective coachee, and support them in improving in these aspects. Haden has nine of these—you might think there are more, or perhaps fewer—which are:

Coaches looking to develop the capacity of their athletes to be coached should seek to cultivate these values and behaviors in the athletes they are working with. Haden gives an example from his own life, where he was a coachee, as opposed to a coach. When he started working with a swimming coach, Haden was struck not by the coach’s direction around the processes by which the coaching would work (e.g., training start at 9am, we train 5 times per week, etc. etc.), but instead by the conversation the coach had with him about the values that were required. These included:

A key part of this is that the required values had been operationalized by the coach—instead of using loose, airy words to describe a vague concept, the coach described the value, and then provided a specific example of a behavior that represents that value.

What values are important for you to see in athletes you work with, which will help them get the most out of the coaching relationship? After I retired from sport, I spent a large amount of time as a children’s sport coach, coaching a variety of different sports to children typically aged from 1 to 15. One of the core values I wanted to develop in these children was curiosity, which I hoped would develop their intrinsic motivation to take part in sport across their lifespan, as well as increase their enjoyment and engagement in the task at hand. To do this, I would ask guiding questions; what happens if we do this? How about if we change this rule? Can you try doing this? If I worked with the same group of children over time, eventually I could start allowing them to ask their own questions, to see where an activity could take us. From my perspective, curiosity is an important driver of being an effective coachee, as it allows for ownership of one’s own learning, a very valuable trait.

In summary, the key take-home from It’s Not About the Coach is that, whilst we might think that the athlete in each coach-athlete relationship is responsible for being coachable, there are steps the coach can take to support the athlete in being that way. This includes outlining the key behaviors and values deemed required to be coachable, because if we can’t define what is required, we can’t be shocked when athletes don’t demonstrate the coachable behaviors. By taking some ownership of this process, hopefully we can have more productive and supportive coach-athlete relationships, supporting longer-term athlete success.