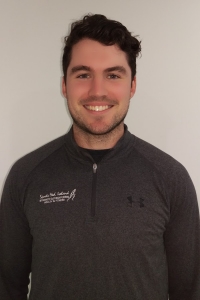 Domhnaill (Donie) Fox is a physiotherapist and athletic development coach from Ireland. He is currently working privately in Dublin city centre with a variety of performance levels and disabilities. He has been attending GAIN for three years and has developed a style of practice which is heavily influenced by his GAIN colleagues and mentors. Donie is currently preparing a number of athletes in their quest for Olympic and Paralympic qualification as well as local Gaelic Games teams in their physical preparation.