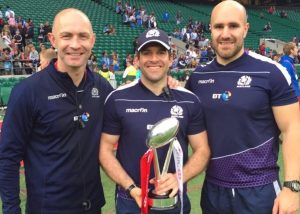 Nick Lumley recently took over as the head strength and conditioning coach for the Edinburgh Rugby professional rugby team. Prior to this role he served as the lead strength and conditioning coach for the Scotland national rugby sevens team. In that role he helped the team improve their form and capture their first ever World Rugby Sevens Series title at the 2016 London Sevens. In 2017 Scotland captured another win in London and finished the overall World Rugby Sevens Series their highest overall rank of seventh place.

After graduating with a BSc from the University of Bath and MSc from St. Mary’s University, Lumley has accumulated a broad set of experience in rugby working for the Welsh Rugby Union and the Gloucester Rugby club. In addition he gained experience working with elite athletes in judo, track and field and bobsleigh at TASS and Team Bath.

Nick has also been a guest twice on the HMMR Podcast: Episode 96 on simple planning solutions and Episode 134 on recovery and conditioning.

Nick Lumley is the head strength and conditioning coach for Edinburgh Rugby.