The post season began in Rhode Island earlier this week as athletes competed across four divisional championships. The biggest improvement was by Courtney Jacobsen (Toll Gate, Warwick, RI) improved her best by nearly ten feet en route to a win in the Central Division. Her new best of 178’6″ is also the third best mark in the nation. On the boy’s side the top marks once again came from the Barrington throwers as Bobby Colantonio (Barrington, RI) narrowly edged Adam Kelly (Barrington, RI) to set a meet record and win the Eastern Division title. Sophomore Jared Briere (Woonsocket, RI) also improved his personal best to win the Northern Division Championship. END_OF_DOCUMENT_TOKEN_TO_BE_REPLACED 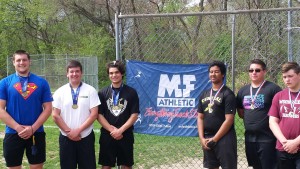 Medalist in the U18 boy’s hammer throw.

The annual International Implement Invitational gives throwers a chance to compete with international implements like the 3-kilogram (under 18 girls), 5-kilogram hammer (under 18 boys), 6-kilogram hammer (under 20 boys), and more. At this year’s edition Bobby Colantonio (Barrington, RI) provided the biggest highlight. Throwing the 5-kilogram hammer, which will be used at the World Youth Championships in July, Colantonio launched a throw of 78.18 meters. That mark ranks him fourth in the world for under 18 athletes in the young 2015 season. His teammate Adam Kelly (Barrington, RI) hit a personal best with the 6-kilogram hammer that also ranks him in the world top 20 in the under 20 age group. In all, there were nation-leading marks all over and meet records in all but one category.

Owen Russell (Moses Brown, Providence, RI) was the headline attraction at the Brian Moretti Falcon Invitational on Saturday and he lived up to expectations with another big throw. His winning effort of 222’2″ was not only almost 100 feet ahead of his closest competitor, but a meet record and just one inch off of his personal best. END_OF_DOCUMENT_TOKEN_TO_BE_REPLACED