With previous coaches, I found that video analysis was essential to fine-tune my technique.  Since working with Dr. Bonarchuk, however, I no longer feel the need to watch as much video.  I trust that he knows what he is talking about and just do as he says.  However, it is still helpful to watch video occasionally to visualize what he is talking about.  It has been too long since I have done this.  Below is a video we took at an indoor training session this week.  I was throwing the competition 16-pound hammer.
END_OF_DOCUMENT_TOKEN_TO_BE_REPLACED

When I talk to people who are unfamiliar with the hammer throw, one of their first comments is always “You must have a strong upper body.” In fact, most of the speed and power in the hammer throw comes from the torso and legs. Contrary to most people’s intuitive belief, the arms and chest are relatively inactive throughout the throw and I haven’t done the bench press in nearly two years. That being said, a thrower is only as strong as his weakest link. One of the nagging problems nearly every thrower encounters is hand pain. After taking thousands of attempts each year, our hands inevitably develop calluses and blisters. I bring this up since I have developed a nagging blister on my middle finger as my body adjusted to the rigors and volume of training full-time. If you think most blisters are annoying, try having one on your finger while a quarter-ton of opposing force is pulling away from you in each turn of the throw. It is in this respect that a strong upper body is important. There is nothing you can do but bear the pain and wait for it to heal. END_OF_DOCUMENT_TOKEN_TO_BE_REPLACED 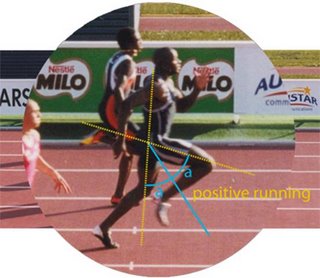 When I was in Holland Frans Bosch introduced the concept of Positive Running to me. I thought it was thought provoking and should be put on the table for discussion. Frans was kind enough to translate some of his remarks on his idea into English. END_OF_DOCUMENT_TOKEN_TO_BE_REPLACED