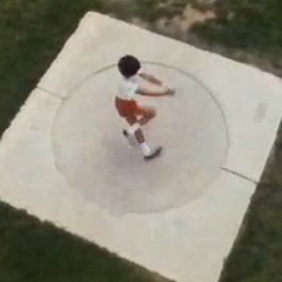 Those of you in America probably woke up this morning and were welcomed by the joyous void created by the absence of non-stop election ads. Well, I hate to be the one to do this, but I’m here to lobby for one more cause before you stop thinking about politics for the year. The USATF Annual Meeting will start on December 4th in Virginia Beach. On the agenda is a rule change (Item 92) that would add the hammer throw to the youth age group for 13 and 14 year old throwers. I encourage you all to reach out to the chair of the USATF Youth Committee, Lionel Leach, in support of this amendment.

As with anything, starting young helps in the hammer throw

A young Koji Murofushi was featured in an IAAF instructional video at age 10 (click to view). By age 29, he was the Olympic champion.

Time and time again, the importance of starting young in the hammer throw has shown its benefits. Koji Murofushi, 2004 Olympic Champion, began throwing at age 10. While attending a clinic by Yuri Sedych in 2003, I saw his then nine-year-old daughter Alexia Sedych throwing the hammer. This summer she won the inaugural Youth Olympic Games in Singapore. Later that year, a 12-year-old Conor McCullough attended the USATF Junior Elite Camp at the USATF Olympic Training Center. Now he is the U.S. junior record holder and the most recent world junior champion. This, along with Walter Henning’s 2008 win, was only America’s second gold medal in a major international competition in more than a half century. The hammer throw is an event centered around rhythm and technique. Both take more than a decade to master and it is essential to start the process young.

The IAAF recognizes that starting young is important. They currently sanction the event and recommend using lightweight 4-kilogram (boys) and 3-kilogram (girls) hammers for the age group. These are also the weights proposed by this amendment. The International Olympic Committee also recognizes the event at youth level, most recently allowing 14 year olds to compete at the Youth Olympic Games. Countries across the world follow this lead, even our neighbors to the north. In the U.S., however, the USATF does not allow 13 or 14 year olds to compete.

The hammer throw is safe

While there are many opponents to this amendments, there is little sound reasoning behind the opposition. The arguments against the amendment normally begin with a mention of safety concerns. But all the data that exists shows the hammer throw is no more dangerous than any other track and field event. Former USATF President Bill Roe also feels “[w]e should investigate the medical issues surround introduction of the events to younger athletes.” He argues that the hammer may not be appropriate at the youth level for the same reason that youth runners may not compete at longer distances. But, runners are not banned from running, they just have to run the 3k instead of a 5k. Similarly, hammer throwers should not be banned, but should throw a lighter weight implement (as proposed). Personally, I think that the idea that hammer throwing can be unhealthy stems from the urban legend that lifting weights can stunt growth. There is no clinical evidence of this, and weightlifting’s own federation includes an under 13 age group for both boys and girls with weight classes down to 35kg (77 pound). If their own sport allows power events, what are we doing?

If weightlifting is not a risk, I do not see the hammer throw as a risk. Kids as young as 9 and 10 are allowed to do the shot put, which is more of a strength event than the hammer throw. The youth age group is even allowed throw the real javelin, which is likely more dangerous for both the athlete and spectator (younger age groups use the TurboJav and if younger age groups were to adopt the hammer, it might be right to adopt a similar training tool in our event). If we are worried about injuries, a kid is more likely to tear an ACL playing basketball or break a bone playing youth football than they are of having a serious injury in the hammer throw. With the rates of childhood obesity climbing, we should do whatever we can to encourage youth participation in sports. Even if America fails to win another Olympic medal in the event, we can help a lot of kids by letting them find a sport they love.

The sport is growing, but needs support to continue to grow

The other common objection is that the hammer throw needs to grow more before it should be added as a youth event. First of all, the sport has already grown rapidly in the past ten years, as documented on an earlier post. The sport is doing its part, and now the USATF needs to live up to its motto of “Sport for Everyone” and fulfill its role of establishing grassroots programs. How many more 13 year olds are going to pick up the hammer if there are no sanctioned events for them to compete in? As was the case in Field of Dreams: if you make it they will come. If you add the hammer throw as a youth event, more athletes will pick up the sport. At least that was the case for me. I first competed in the hammer throw merely because I saw it offered as an exhibition event at the 1999 Junior Olympic Regional Championships in Cheney, Washington. I had already qualified in the shot put for the competition, but had no chance of winning a medal there. As a high school freshman, a medal was the coolest thing in the world and when I saw the hammer throw on the entry list, I immediately signed up. I had never thought of trying the hammer before, but entered my first meet simply because it was a new event where I had a chance. I would not have begun the event if there were no competitions to introduce me to it. Offering more competition opportunities is the quickest way to grow the sport since other kids like me will see a potential new event.

Let your voice be heard

I am likely preaching to the choir with this post, but that is the point. It is those of you that love the hammer throw that can give this amendment the support it needs to pass. The hammer throw likely has the least political support at the USATF. Harold Connolly worked tirelessly in support of this issue during his final years and I am hoping that we can continue the effort in his absence in order to further his legacy. With your help, we can. If you agree, please contact Mr. Leach ([email protected]). Contact other members of the executive committee (contact information is available here). Let them know that you support the amendment. And, more importantly, let them know why you support the amendment and how the event has changed your life. Feel free to CC me on your emails or copy your responses below since I’d also love to hear your stories.