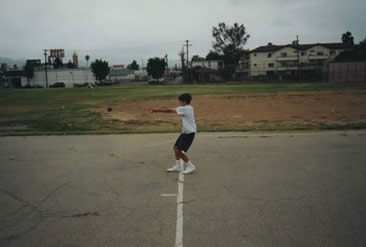 Last November I wrote about our struggle with the USATF to get the hammer throw added as an official event for young American throwers aged 13 and 14. It was a battle we began a little too late, which meant we were underdogs throughout the process. Despite this, we had quite a bit of success. While the hammer throw was not added as an official event for the younger age groups, it was given exhibition status. This allows some meets and clubs across the country to host youth hammer throwers and remain covered by the USATF insurance policy. In addition, the full initiative will be up for a vote again next December which should give us more time to lobby the support we need.

In the meantime, I was browsing some of my old hammer throw videos yesterday and ran across a video I took of Alexia Sedykh throwing the hammer at age nine. Alexia was the winner of the inaugural Youth Olympics Games last summer and threw a personal best of 62.17 meters at age 16. As you can see in the video below, it helps to start young. While Alexia has some big advantage in both coaching and genetics (her father is world hammer thrower record holder Yuri Sedykh and her mother is world shot put record holder Natalya Lisovskaya), it still helps to start young. This is the reason we are fighting to hard to create opportunities for young American throwers.