Since I was born in America, it is hard to truly call any place in Switzerland home. However, my Swiss passport tells me that my “place of origin” is a small town called Einsiedeln. That is where my grandfather was born and raised. 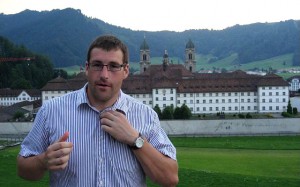 The Bingisser name has deep roots in Einsiedeln. Switzerland has a much lower level of inter-country migration than America and Swiss families tend to stay in the same area for generations. That makes certain names synonymous with certain cities. When I first competed in the stone throw at a nearby competition back in 2003 the head official immediately asked me if I was from Einsiedeln after seeing my name. He was a little confused that I couldn’t understand his Swiss German (or much of any type of German back then), but we soon sorted things out. I used to be able to sit down for dinner in the town and almost guarantee a truck would drive by with my name on it since the now-defunct Bingisser Transporte trucking company was based in Einsiedeln.