I’ve ranked the top ten men. I’ve ranked the top ten women. But there are many moments that can’t be captured in athlete’s rankings. Throughout 2011 there were some great events in hammer throwing that were one-off occurrences or even something a non-thrower accomplishes. Below is a list of my favorite moments in hammer throwing from the past year. 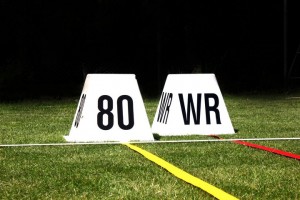 Since the women’s hammer throw debuted as an Olympic event in 2000, hammer throwers worldwide have been debating when the first woman will break 80 meters in the hammer throw. The world record was already at 76 meters and that led my first mentor, Harold Connolly, to think it would happen before 2004. Bondarchuk also thought it would happen sooner. Now, in 2011, Betty Heidler came painfully close to the barrier at Halle. This was hands down the top hammer throwing moment of 2011. Halle offers a unique atmosphere with thousands of fans showing up to just watch the throwing events. The environment produced magic once again as Heidler crushed the old world record and was less than two feet off the world record. Heidler continued her season with five more meets over 77 meters. At this level of consistency I think it is only a matter of time before one throw lands over the line.

Fourteen years ago, at the age of 23, Koji Murofushi competed in his first world championships. Despite his youth, he qualified for the finals where he would place 10th. In 2001 he improved to silver, and in 2003 captured the bronze, but the world title has always eluded the former Olympic champion. At age 36, most people (myself included) thought that his chance to win had passed him by. But he managed to keep stay healthier this year and win gold in Daegue. In the process, he became the oldest hammer throw world champion in history. In watching the qualifying round, you could tell we were in for something special. He posted the top qualifying mark with a throw that seemed to have less intensity than a Ben Stein lecture. He turned up the speed in the final and won a narrow battle with Hungary’s Krisztian Pars. Throughout it all, his technique looked better than ever to me and now he immediately enters the favorites circle again heading into London.

Koji may have reentered the conversation as a favorite for 2012, but his upside is limited since he will be nearly 38 during the Games. Below him on the podium was a man that was overjoyed with third place and is who I consider the biggest favorite for the games. After winning the Olympic title in 2008 and world title in 2009, Slovenia’s Primoz Kozmus shocked everyone by announcing his retirement two years ago. About a year ago he announced he would make a comeback. With a new coach and more than a year without training, his season started very slowly. His first two meets registered mediocre results of 75.10 and 72.42 meters. But he slowly improved and won a surprise bronze at Worlds. Shortly after, he broke 80 meters again. It is exciting to see Kozmus return to his old form again. With improvement this fast, I think the whole hammer community (except his competitors) are hoping to see some great throws by him next year. 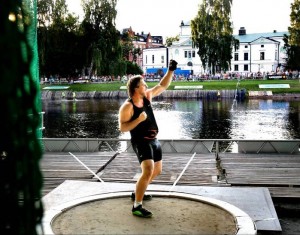 Throwing over a river is fun. Photo by nwet.se.

The athletes attempted to throw the hammer over a river! Ideas like this will help the hammer throw grow and I am putting the finishing touches on an article about this topic for an athletics magazine so that the meet gets the credit it deserves for this idea.

» Video Highlights of the Competition

5 – ISATF Berlin puts the hammer in the main program

For years we have been that the following things are impossible for a top-notch one-day meeting to do: (1) hold the hammer in the main stadium; (1) hold the hammer during the main program; and (3) hold three long throwing events at the same meet. The ISTAF Berlin meet is one of the world’s biggest meets and used to be part of the Golden League. This year it accomplished all three things without killing anyone, permanently destroying the grass, or ruining television coverage. The other big meets are starting to run out of excuses.

I had the good fortune to watch french junior record holder Quentin Bigot compete four times this year. Each time he impressed me more. His technique is solid, especially for a junior. While he is a bit shorter than other hammer throwers, he makes up for it with precision and power. He dominated the European Junior Championships and then unleashed a throw of 82.84 meters in October. For the past decade juniors have been throwing the international 6-kilogram implement. During that time, only one thrower has ever thrown further and Bigot was only five inches short of that mark. His throw put him ahead of Pars, ahead of Conor McCullough, and many other greats on the all-time lists (Olli-Pekka Karjalainen still holds the most impressive junior mark when he threw the senior hammer 78.33m in 1999). He has already thrown nearly 72 meters with the senior implements and it will be fun to compete against him in the future and watch him continue to improve.

Going into the world championships I said Betty Heidler was perhaps the safest bet of the whole meet. Safer than Usain Bolt. Safer than Sally Pearson. She had killed her competition in eight straight meets, led the world lists by four meters, and had produced all of the years best throws. But Tatyana Lysenko dramatically stole the show in Daegu. Lysenko came out blasting with her first three throws better than anyone else was able to produce the whole competition. Heidler, meanwhile, was flat. She was in third place and five meters under her personal best until she improved to 76 meters in the fifth round. Lysenko still won by more than a meter and all of her legal throws were over 74.50m. Heidler continued to dominate at the end-of-season meets, but Daegu reminded anyone that even the biggest favorites can fall.

I enjoyed watching Kibwe Johnson (USA) and Sophie Hitchon (GBR) have breakthrough years in 2011. Johnson became the first American to break 80m in more than a decade with a win at the Rio Hammer Challenge and Hitchon broke the UK record twice, the second time just days after her 20th birthday. While many other stars emerged this year, I know both of their coaches well and thus their breakthroughs had special meaning to me.

Klaas has been one of the most vocal critics of the hammer throw’s exclusion from the Diamond League. Her recent blog post shows why the decision makes no sense. Unfortunately logic doesn’t always win, but since it is jointly signed by leaders in our sport, it may be a turning point for the issue.

» Read Kathrin’s Letter in its Entirety 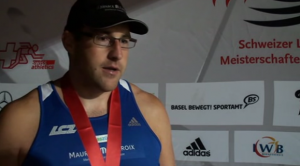 Yes, I just referred to myself in the third person. And yes, I don’t deserve to be included in a list with these other amazing moments. But this is my site and one of the benefits is that I can include whatever I want on this list. This was one of my favorite moments of the year. A disclaimer in case my wife is reading this: this list only comprises the best hammer throwing moments of the year…that is why I included my personal best and not our wedding.

» Video of My Winning Throw and Post-Race Interview