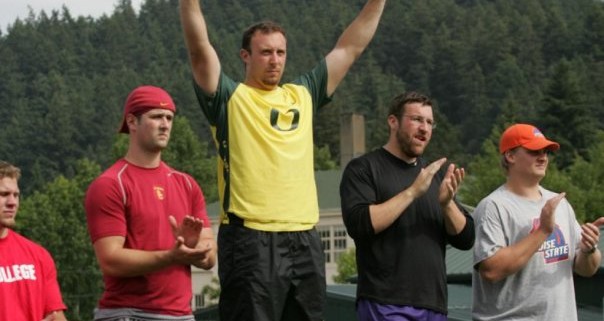 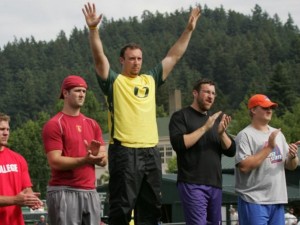 Back in my better looking days I had a beard and Brian Richotte beat me for both the Pac 10 and NCAA Regional titles.

Compared to other sports, it is amazing to hear what type of situations many hammer throwers have to train through on their way to this year’s Olympic Trials and Olympics. My friend Brian Richotte is a perfect example. Brian coached himself to 69.56 meters in 2011 even though he had just come back to the sport after several years away. His prospects are even higher for this year, but after talking with him it sounds like he is lucky just to find time to work out. In addition to training, he works full-time, coaches the throwers at the University of Detroit Mercy, and has an (understanding) girlfriend. Here is how he describes his week: “Monday through Friday I leave my house at 5:30 am and work until 5 pm. I then drive 50 minutes from Ann Arbor to Detroit in time for a 6 pm starting time for practice. I get home around 9:30 or 10 pm at night.” As he puts it, this schedule teaches him to learn to love coffee.

Brian and I got to know each other through our mutual mentor Harold Connolly and I believe he helped instill a great work ethic in both of us. That has helped us become success on the field, in the classroom, and in the workplace. (After graduating from Radford University, Brian finished his eligibility while earning his Masters at the University of Oregon and snatching gold from me at the Pac 10 Championships.) Brian’s case may be one extreme of athletes trying to break through to the international level, but he is certainly not alone in his efforts.

For me, this dedication is part of what makes the hammer throw such a great event and what gives hammer throwers a great connection. Few endeavors are addicting enough for people to pursue them so wholeheartedly in that situation. It has become a cliche, but hammer throwers compete first for love, not money or fame since there is little of those in this sport. You can always make time for love.

Brian’s employer (Ferguson Enterprises) has been supportive in letting him leave work early when needed. This is a key because even love needs support. We all have to look around for employers that are supportive, and after talking with Brian I was reminded that I made the right decision to move to Zurich and take a job with UBS. My position allows me to work just 25 hours a week and divide the hours as I wish during the year. As with most European countries, I received and am expected to take ample vacation days. My coworkers are also very supportive; they both understand my limited hours and are always interested in my progress. We had our annual “holiday” dinner on Friday and it reminded me how thankful I am to have found such a supportive group.

The banking industry may have a bad name lately, but UBS has been more supportive of track and field than perhaps any non-sportswear company in the world. In addition to supporting me, UBS will be an international sponsor of the 2014 European Championships in Zurich and the main sponsor of our national team leading up to the event. They invest millions in various track and field sponsorships around Switzerland each year. I will be proud to have my company’s logo on my uniform as I enter the ring in front of 25,000 fans. So, if you have a small fortune lying around, follow the link below to watch a short promotional video my subsidiary put together last year. I make a small cameo about halfway through as they mention the importance of the tax and legal team.