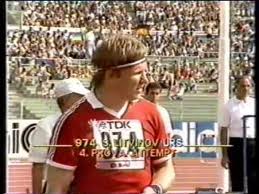 As many of you realized, yesterday’s post was an April Fool’s joke. I have never done the Litvinov workout, but neither has Litvinov. In talking with his son last year, current world-ranked hammer throw Sergej Litvinov Jr., he only heard about the workout in 2007 from another thrower that had tried it. When he explained it to his father “He laughed and said that he had never done it.” I have a lot of respect for Dan John, the person who first wrote about the Litvinov workout. But he never witnessed it first hand which makes me think the story boils down to a case of mistaken identity or a tall tale that has grown over the years. In any event, the workout is out there and a popular choice for many athletes. Just type “Litvinov Workout” into a YouTube search if you want to see some examples.

There are so many reasons why this workout is wrong. For starters, not one article I have read about the workout ever mentions what sport the workout is good for. Most describe the workout using adjectives like “cool”, “tough”, or “grueling”. But none describe it as effective because in order to determine if it is effective you have to know what sport you are trying to get better at. It may indeed break up monotony, increase mental toughness, or give you a good locker room story. But it has little relation to the hammer throw.