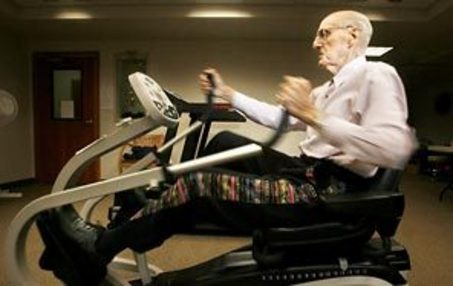 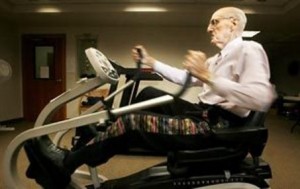 There were advantages and disadvantages of training off campus when I attended the University of Washington. The main downsides were the commute and the fact that the left side of the sector only extended 65 meters before meeting a steep hill filled with blackberry bushes. On the plus side, I got a chance to throw with a lot of other people in the community since West Seattle Stadium was the only place in town to train. I threw with local high school kids and throwers from the bustling masters scene, aged 13 to 99. The 99-year-old was Leon Joslin.

The first time I met Joslin I was taken aback. I had heard about this world record setting masters thrower, but when I met him he was just like a normal thrower with a bit of curmudgeon mixed in (he seemed to resent the fact a few young guys were disrupting his routine and slowing his practice down). He kept showing up for his weekly routine and looked more natural in the ring than anywhere else. His car looked huge for his frail body and he had trouble walking up the half dozen steps to our throwing circle. But once in the ring had no problem with his balance while throwing the discus. He would just plop down his bowling bag, pull out a few implements, and start throwing immediately. I don’t think he ever quite warmed to Zack and me, but it was inspiring to see a man of his age continue to train with such vigor. This is a man who was born before the Titanic sank, played high school football with President Gerald Ford, and was college teammates with the legendary Jesse Owens. Most people are lucky to be alive or even walking at that age, let alone breaking numerous world age group records. Joslin had seen a lot of things in his life, and the fact that he wanted to spend his last years throwing things is a tribute to our sport. While he made it to his 100th birthday this spring, he passed away last month before he got his chance to make an attempt at any of the 100-105 age group records. Joslin was frequently the subject of local newspaper and television profiles for the past few decades. You can check some of them out here (1997), here (2008), and here (2010, with video).

While Joslin did not reach his goal of competing at the age of 100, Club Northwest is putting together a discus competition in his memory where they will try to bring together 100 discus throwers at the June 20th edition of the Club Northwest All-Comers Meet outside of Seattle. Joslin was a regular competitor and would have no doubt attempted a world record there if he were still around. No experience is necessary and the entry is free, but donations will be accepted to help fund a new discus circle and cage for the Shoreline School District. The meet is trying to get a headcount of entrants, so please contact former USATF President Bill Roe if you are interested in throwing.