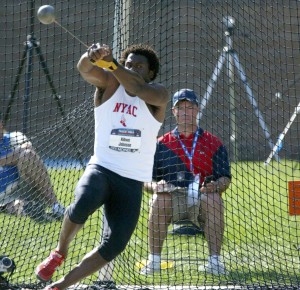 When you ask people who are the best technical throwers currently throwing they will likely throw out the name of Koji Murofushi or Primoz Kozmus. Few would likely name Kibwe Johnson. The reason for this is that people tend to focus on what people do wrong rather than what people do right. For years, Kibwe did a lot wrong. As an example, take a look at the picture to the right. But now many of those errors are gone, and his strengths are even better. While his technique is still very much a work in progress, and he would be the first to say that, I feel it needs a defense for the many things he does well.