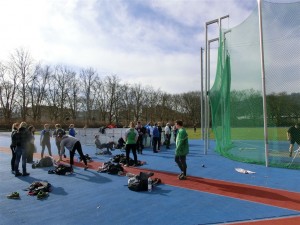 Martin the coach couldn’t have had a better day. Six of my youth throwers were entered in the competition and all six set personal bests. All six also met their qualification standards for their respective Swiss age-group championships. The group has been throwing the hammer once or twice a week for the past four and a half months. While most competed in other events indoors, this was their first chance to measure their progress in the hammer throw. Each one has reached new bests in training, so I just hoped the competition results would reflect that and motivate them even more as the real season approaches. The next meets for them are not until May and their championships are not until September, so there is plenty of time for improvement. After setting a personal best of nearly 10 meters, I reminded one athlete that this does not happen every day. I have to remind myself that too. Not every day can I see so many of my throwers celebrating a personal best at once.