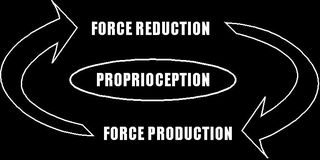 Movement is quite simple and from that wonderful simplicity comes the complexity of sports skill and performance. Twenty-five years ago in an attempt to better explain movement and how we should effectively train movement I came up with this simple diagram I call the Performance Paradigm. It was somewhat like what Albert Szent-Gyorgi, once said, “Discovery consists in seeing what everyone else has seen and thinking what no one else has thought.” Essentially it is the stretch shortening cycle of muscle with a more global interpretation and proprioception brought into consideration. It is the basis for what some people call the Gambetta Method; to me it is common sense. I use this to evaluate movement efficiency or deficiency and then to guide training and if necessary rehab. 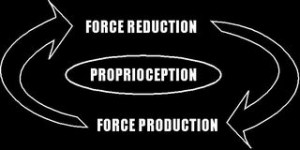 Essentially all movement is interplay between force reduction and force production. The quality of the movement is dictated by our proprioceptive system. We begin movement by loading the muscles – this is the force reduction phase. Basically this is the eccentric loading phase as a well as instantaneous isometric action that lends stiffness to the muscle. This is the most important component of the performance paradigm, but probably the most overlooked as well as the most misunderstood. There are several reasons for this; the most notable being that it is less measurable. Because it is more difficult to quantify we have tended to emphasize the more measurable component, force production. It is during the force reduction phase that most injuries occur. Think landing on one leg and tearing an ACL or planting to cut and spraining an ankle. It is during this phase that gravity has its greatest impact; it is literally trying to slam the body into the ground.

Once force has been reduced the subsequent result is force production. Force production is easy to see and easy to measure. Consequently it gets an inordinate amount of attention in the training process. We see it because it is the outcome. It is how high or far we jump. It is how much we lift. But just because it is easy to see and measure does not mean it should receive the inordinate emphasis, in training that it does. It must be stressed that it is the component of the performance paradigm that is highly dependent on the other phases.

The third component of the Performance Paradigm is proprioception. Ultimately it is the glue that binds a whole functional program together is proprioception. Proprioception is the awareness of joint position and force derived from the sense receptors in the joints, ligaments, muscles, and tendons. It is that component that gives quality to the movement. “The quality of movement, in part, is dependent upon neurologic information fed back from proprioceptors within muscles and joints to the higher brain centers. The information returning to the central nervous system from the periphery includes “data” concerning tension of muscle fibers, joint angles, and position of the body being moved.” Logan and McKinney (Page 62) It is the feedback mechanism that positions the limbs to be able to achieve optimum efficiency. It is a component of movement that has been all but ignored in most traditional training programs until recently. It is highly trainable, especially if it is incorporated as part of a whole program.

It is almost too simple. Perhaps to appreciate proprioception we should look at the extreme case of a stroke victim that is able to return to normal movement patterns. Why can’t an athlete who has all their capacities enhance the quality of their movement by focusing on the same things that the stroke victim has to focus on to get back to function? The key to that is proprioception. We must strive to constantly change proprioceptive demand throughout the training program in order to enhance the quality of movement.

The performance paradigm will serve as a guide to determine how we train all components. It can also serve as a very useful guide to help us to evaluate movement from a slightly different context. It should serve as a guide to be more functional in our approach by emphasizing the timing and sequence of all three components of the paradigm. The synergistic interplay between them will produce the highest quality of movement.

It is very easy to get caught in the trap of measurable strength. How much you can lift or how many foot-pounds of force you can express on a dynamometer are meaningless numbers. Functional training does not depend on measurable strength. Quality of movement, coordination and rhythm are more important. The goal is always to apply the strength that is developed in the actual sport performance. How is the force expressed? Can you produce and reduce the force? Force production is all about acceleration, but often the key to movement efficiency and staying injury free is the ability to decelerate and stabilize in order to position the body to perform efficiently. A good functional training program will work on the interplay between force production, force reduction and stabilization. The end result is functional strength.