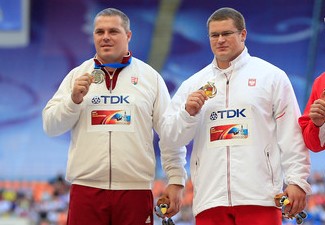 The IAAF Hammer Challenge will come to a close on Sunday with a stop at the Rieti Meeting in Italy. The women’s competition is all but decided as a late season surge of three straight competitions over 77 meters for Anita Wlodarczyk gives her an insurmountable 6.90-meter lead heading into Rieti. The men’s competition, on the other hand, couldn’t be much closer. The top two throwers are only separated by 6-centimeters. However a unique aspect of the IAAF Hammer Challenge means that the final competition might not count at all.

Since the IAAF Hammer Challenge began in 2010, it has slowly evolved and improved. The series began as a consolation prize for hammer throwers after the event was excluded from the Diamond League. The first season drew complaints from all the top hammer throwers because competitions opportunities, media exposure, and earning opportunities all decreased for the event at the same time the Diamond League was helping other field events gain more exposure and earn more money. The second season saw no improvements as the series actually shrunk in size. Finally this year things have begun to improve. While the series hardly serves as a replacement for being excluded from the Diamond League, more competitions have been included which addresses one of the problems. However, issues still remain as the circuit is struggling to find a formula that works.

The structure of the IAAF Hammer Challenge awards end-of-season bonuses to the top ranked athletes in the series. The rankings are determined by simply adding up each athlete’s top three performances at the meetings. What place an athlete finishes in or how many meets they compete in are irrelevant. All that matters is that their three best meets add up to the furthest distance. This can create some absurd outcomes. For example: an athlete can win the majority of meets and still finish second just as Kristzian Pars is in second place despite beating Fajdek in three of the four IAAF Hammer Challenge competitions they have faced off in. Another consequence: not every meet counts. While the Diamond League has its flaws, it at least awards points for each competition. However not every meet counts in the IAAF Hammer Challenge since only the top three result are added together. In a sport looking for any possible way to connect with fans, de-empasizing the competitive element of each meet is not the way to do that.

Intuitively, with two throwers this close in the rankings, whoever wins on Sunday should take home the title, right? Well that’s only half true. If Fajdek wins he is guaranteed the title. However Pars, who has had the stronger season overall, can only win if all the stars align in a highly unlikely way. The following are just two absurd outcomes that would end in another victory for Pars, but make Fajdek the 2013 IAAF Hammer Challenge champion:

As an athlete and coach, I will not be truly satisfied until the hammer throw becomes part of the Diamond League. A tight race in the men’s competition and a come from behind victory by Wlodarczyk show that it has the drama and excitement that would add value to the IAAF’s premium circuit. While one Diamond League had the hammer throw this year, making a larger change will not happen in the short term. In the meantime small changes are both easy to implement and can add value to what we have. Making each meet matter is a start. Having an exciting final with a title on the line makes the sport more interesting for fans, athletes, and the media.