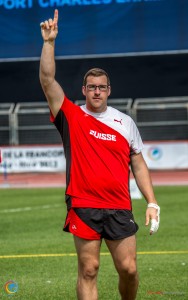 After taking two weeks off at the end of September, I have already jumped back into training for 2014 and the first week is now behind me. During my time off I took some time to reflect on the last season. Whether I make this public or not, this is something I do every year. Some things are more clear in hindsight than they were at the time and everyone must must learn from these moments in order to continue to improve in the future.

I had just two goals to start out the season. Unlike many athletes, I do not define my goals in terms of how far I want to throw or what place I want to finish. I simply identify what I need to do to get better and then focus on that. After the 2012 season I was physically in the best shape of my life but I couldn’t translate that into the throw. Therefore my first goal was clear: my technique needed to get better. My only other goal related to my priorities for competitions. Rather than trying to hit a peak for the Swiss Championships, I wanted to shift my peak to the Jeux de la Francophonie this year. Having a later peak allowed me more time to prepare and hopefully reach better performances. With those two goals I started out towards the 2013 season.