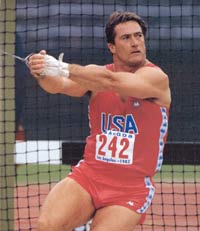 Martin: Both after the 1968 and 1984 Olympics you took extended breaks from the sport. What was the reason for retiring?

Ed: After 1968 I quit because I felt betrayed and downhearted. The head Mexican Olympic Hammer throw official did not know the rules. I expected to be on the podium. I had thrown medal throws the year before and that year. In 1967 I was ranked number two in the world with the furthest throw in the world by over a meter and had traveled all over Europe without a loss.