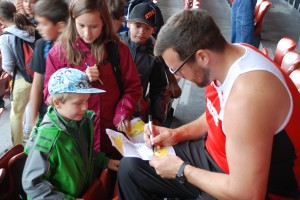 The European Championships are not even over, but since my competition finished yesterday I’m already looking back on it. And I can’t help but feel mixed emotions. There was lots of good. I placed 21st in Europe. The support of my friends, family, and throwing community was amazing. I got to represent my country in front of a home crowd, and I helped more people learn about the hammer throw. I will write more about the positives in the future. But unfortunately there was also some bad. Mainly: the media coverage.

If you don’t live in Switzerland you’ve likely been oblivious to some of the media attention this meet has gotten. Suffice to say, it’s a big deal. This has brought a lot of attention to the hammer throw like the Watson.ch video I posted on Wednesday. But it has also brought controversy. After the Swiss federation decided not to use the wildcards they were entitled to in every event, the two biggest Swiss tabloids jumped on the topic asking why I was selected since I had not met the qualifying standard. (I qualified by placing highly at a European Athletics meet, one of several other qualifying methods.) 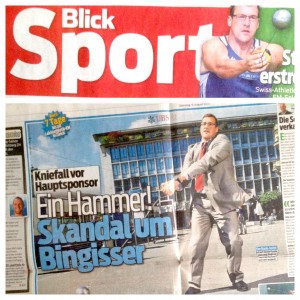 The only people that seem to have a problem with my selection were the media. But they are asking the wrong questions.

I was a scapegoat for the federation’s decision not to bring more athletes. Add in at least a half dozen article, a few two-page photo spreads, an insinuation that I threatened legal action (false) or that UBS influenced the selection (also false), and you get the gist of my last week. At the start I responded well to the article; that night I threw four season’s best and fouled a personal best, all fueled by adrenaline. But it was a very emotionally draining week with endless calls, emails, messages, and hate mail. I felt like I needed to call Olivia Pope. That’s not an excuse for not throwing further, but it didn’t help either.

The personal attack hurt, but thankfully those people that know me know my character. I received nothing but support from everyone I talked to. What is worse is the media is only asking the easy question: Why did they select me? The answer to this is simple: I fulfilled the selection requirements. No one is asking the more difficult questions like (i) why did the federation not select more athletes, or (ii) why is it that we have 52 athletes with the qualifying standard but only six field event athletes, no finalists, and no throwers over the standards? The first question is an important topic for another day, but the last question deserves to be answered now.

While the last question may be difficult to ask, the answer is surprisingly easy. All standards are not created equally. It starts and ends there. So much in track and field is built around standards including selection policies, funding, and other support. Last year I talked about how much more difficult the hammer, discus, and triple jump standards were than other events. The field events standards overall are much tougher, and even more so at the European level. At this year’s European Championships just 16 women qualified in the shot put. I was far from the standard yet ranked 106th in the world currently by All-Athletics. Switzerland had other athletes meet the standards with rankings in the 200s. But I am viewed as unqualified even after I placed higher at the championships. The standard has become the measure of success when it is not always equal.

What is the solution? Base decisions on objective numbers rather than subjective numbers. In other words, look at the rankings. One thing Harold Connolly taught me is that if you want to be the best, see who is in front of you and start crossing their names off as you beat them. The fewer names ahead of you the better. And it also helps when it is an easy list to move up.

All federations, not just Switzerland, have limited resources and all have the mandate to win. So the goal should be to find the best return on investment. Looking at the points above, it is clear that the field events are the answer. It’s just a matter of numbers: there is less competition and a larger role for coaching and technique in the field events. Switzerland did invest in a top German pole vault coach two years ago and it is no wonder that three of the six field event athletes with the standard were pole vaulters. This year we’ve also had national records in the women’s pole vault and produced a big medal favorite for the Youth Olympics. I hope Switzerland learns from this. Already, with no support for the hammer and little support of the other field events (four of the eight field events have no national coach, the only events without one in Switzerland; the head of field events left and was also never replaced), we are starting to build a new generation of throwers and jumpers.

On the world level it is clear we are moving forward. We’ve done a lot with a little. But we have yet to produce a star and it will be difficult until decisions are made more objectively. But the Swiss media does not want to ask the difficult question of why there aren’t many field event athletes on Zurich. Until that question is asked the results will not change.