In the call room before the European championships qualifying round last week an official was trying to find out if he needed to change the cage setup for anyone and asked “Are any of you left handed or is everyone normal?” Szymon Ziolkowski responded “I’m not left handed, but I don’t know if I’m normal either. This season I decided to continue to train after 26 years of throwing the hammer.”

At 38, Ziolkowski wasn’t the oldest man in the field, but he is up there. He won Olympic gold 14 years ago and has kept with the sport through some ups and downs ever since. But something keeps bringing him back. It’s what brings all of us back. As he said that in the call room, I couldn’t help but think about my mentor Harold Connolly who passed away four years ago today.

→ Related Content: We write an annual remembrance of Harold Connolly and his contributions to our sport. Read our previous posts here, here, here, and here. 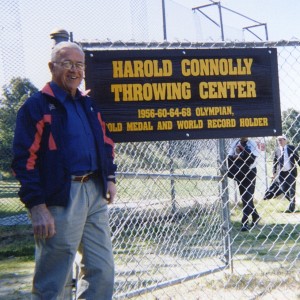 Harold only began the hammer in his twenties, but he never let go of the sport. He qualified for four Olympic teams and nearly made a fifth at age 41. He took a break from throwing after that, but coached, ran a training center, and could never imagine actually leaving the sport. When he took a job in the 1990s leading the Special Olympics he moved across the country and was busier than ever. But soon after he arrived he was back in the sport after he volunteered to coach Kevin McMahon and the Georgetown throwers.

The whole time he still wanted back in the ring himself. In an interview with the Washington Post about coaching he said “It’s perfect. It enables me to get out of the office. I’ve got a hip replacement and after I get a knee replacement I’m taking up the sport again. I’m going to be a masters hammer thrower with replacement parts.”

By the time I met him a few years later his doctor’s recommendation kept him out of the ring as it was not listed as a suitable activity for his new knee. But he kept citing studies that showed the benefits of rotational movements for the balance of elderly people. The hammer throw, he said, might be a cure for old-age clumsiness.

A year or two before he died he couldn’t resist and got back in the ring against his doctor’s, and likely his wife’s, orders. He reported back that he was quite dizzy but it was a blast. You just couldn’t keep him away from the sport.

I have this same feeling. So does Ziolkowski. As he said in the call room, it is not normal but every hammer thrower has it. And who cares if it’s normal; it’s love. It’s that love of the sport that holds us together despite the lack of outside support from federations and governing bodies. It’s love that keeps us from letting go of this sport. And it’s what keeps me from letting go of his memory. To keep his legacy alive go take a few throws today and try and bring someone new with you to spread the love.