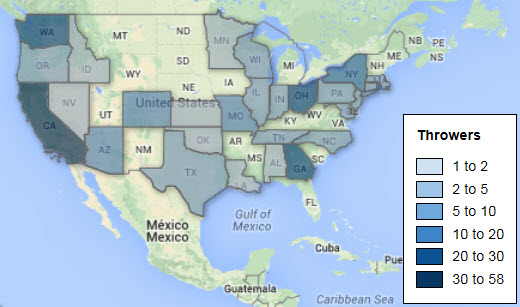 Bob Gourley’s national performance list is the thorough catalog of all elite high school hammers throwers in America. To be included in the list, boys must break 150 feet with the 12-pound hammer and girls must throw more than 120 feet with the 4-kilogram hammer. This year 239 throwers broke that barrier. But more impressive was the geographic diversity: throwers represented 28 different states. As written about last week, this resulted in 15 new state records. Below you can view the distribution of throwers by state.

Rhode Island remains the strongest state as they have the greatest history of youth hammer thrower. This year they produced 57 throwers that made the list, nearly twice as much as any other state and were especially dominant on the boys side. However California gained some ground and rose to second position this year. Ohio, Washington, and Georgia all having more than 20 throwers also. New York was just behind, but will likely move up next year as the weight throw is being added as a official event at the state championships in 2015.