But one thing that will be different in the women’s competition is the chance for a world record. Wlodarczyk represents the best hope of a new world record from any event in Beijing. After many years of being on my annual list of reasons to watch the hammer Anita Wlodarczyk not only broke the 80 meter barrier for the first time, but skipped over it and went straight to 81 meters this month. The women’s hammer is a relatively new sport still and the record has been broken now 14 times in the last 16 years, but you would have to go back to May of 1999 to find a time when the record jumped as drastically as it did three weeks ago. It will be a tough challenge for Wlodarczyk to improve it even more at a major championships, but she did it before with a record at the 2009 World Championships. Perhaps she can do it again this week. 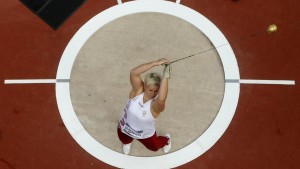 After breaking her own world record Wlodarczyk cemented her position as favorite. She has not lost in 2015 and undefeated dating back until June of last year. In nine meets this year her average margin of victory is by nearly nine meters. In four meetings against her closest rival Betty Heidler she has won by an average of 2.26 meters. She simply looks unstoppable. One of the big questions is if she can launch a new record. If so, there is a special $100,000 bonus available for her from the IAAF.

Just making it to the starting line is a bit of an accomplishment for former world record holder Betty Heidler. After catastrophe at the last World Championships, Betty Heidler said she would not longer compete at Worlds. She now has changed her mind, but it still seems that the 2013 World Championships was a turning point the women’s hammer. Before that point Heidler, Wlodarczyk, and two-time World Champion Tatyana Lysenko were in a constant battle for preeminence. Since then Wlodarczyk has risen to a new level. Lysenko has given birth to a baby and struggled to find form. She turned down her automatic qualification for Beijing and will not be defending her title. And Heidler has been left to play a secondary part. She continues to put up some big marks occasionally, but has lacked consistency and also led to a disappointing fifth place finish at last summer’s European Championships. Even Beijing does not have good memories as she placed just 9th at the 2008 Olympics after coming off a world title the year before.

Still, if you ignore her recent history at major meets, she is a favorite for the podium. She has the second best mark in the world this year and has not lost to anyone except Wlodarczyk during the summer season. Four of her last six meets have been over 75 meters, a mark only she and Wlodarczyk have surpassed this year.

The home crowd favorite will likely be Wang Zheng. It is difficult to gauge her form as she has competed just once, with mediocre results, since May. But her early season results and consistency showed that she is in on the short list to make the podium. She has also shown she can throw well under pressure as she placed fourth with a personal best at the last World Championships.

The 2012 World Junior champion has made a big leap forward this year by adding nearly three meters to her personal best. She also has had the consistency to prove she might make the podium. In addition to several domestic wins she captured the European Under-23 title. In fact her lowest finish this year was a third place to Heider and Wlodarczyk at the European Team Championships.

Amber Campbell and Sultana Frizell will lead a strong North American team to Beijing as both are among the top 10 qualifiers. South American Rosa Rodriguez adds even more depth from the Americans and beat both Campbell and Frizell at the Pan American Games last month.

The European contingent will be a bit weaker as Russia did not nominate anyone from their strong group of throwers to the championships and the top Belarusian was also left of the start list. But German Kathrin Klaas always needs to be in the conversation along with Joanna Fiodorow of Poland. European silver medalist Martin Hrasnova started the year off strong but has struggled heading into the championships and it appears she will be less of a factor this year as she has not broken 70 meters in her last six competitions dating back to May.

Also, as with the men, you also have some athletes just back from doping bans. Zalina Marghieva returned from her ban three weeks ago. She has the sixth best qualifying mark, but with just one meet it is hard to gauge her form. Zhang Wenxiu was banned at the Asian Games in October before she appealed her suspension and returned to competition in May. Still, she has not competed much and is well off her form from pervious years. 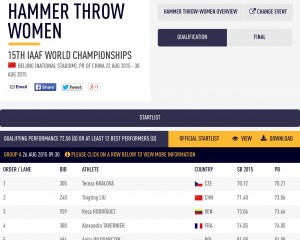 The 32 qualified athletes will start out with three qualifications throws on Wednesday morning in Beijing (Tuesday evening in the US). The top 12 athletes will move on to Thursday’s final. The complete timetable is on the IAAF’s webpage.

For a historical look at the world championships, check out Athletics Weekly look at the men’s hammer throw as well as all the stats you could ever think of over at Track and Field News as well as their predictions.