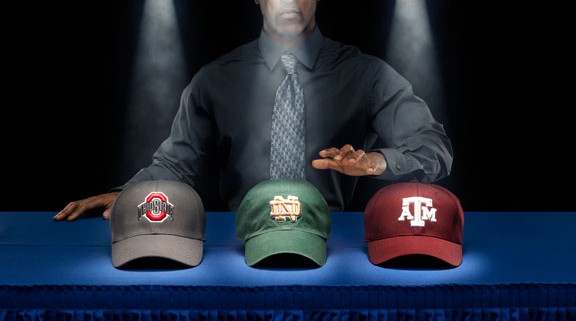 If you talk to many parents about why their kids compete in sports, one of the top answers is that it will help pay for college. It used to be that kids were encouraged to play sports to have fun, or to lead an active lifestyle. But in recent years it has come to the point that the hope of a scholarship might well be the leading reasons that American kids become involved in organized sports.

This mindset has many problems: it puts unnecessary pressure on kids, leads them to specialize early, and contributes to a slew of other issues. But as a track and field athlete I see an even larger problem: it takes athletes away from our sport. In speaking with Nick this summer he mentioned he loses many potential throwers to volleyball and other sports after they are given a misleading sales pitch on their chance of a scholarship in that sport. These kids are so focused on the scholarship that they buy in. But the result is less than expected as most athletes will ride the bench in the other sport and lose the chance to truly succeed in our sport. So here are some straight facts that will make you think about the situation.

First off, scholarships are hard to come by. There are many more high schools than colleges, so athletes are fighting for limited roster spots and scholarships. Overall, according to some great statistics from Scholarship Stats less than 8% of high school athletes go on to compete at a sport in college. But that is just looking at the surface. Dig a little deeper and you see less than 2% compete at a NCAA Division I level, where a scholarships is most likely. The rest compete at lower divisions where scholarships are either severely limited or nonexistent. And of those 2% even fewer actually get a full ride.

→ Related Content: Read our HSHammer.com Recruiting Guide for tips and honest input on the recruiting process for athletes and parents.

To give you an example of the real world I can explain my own history. As a two-time All-American many people assume I had a full ride. But the opposite was the case. I spent my first three years on the team without any scholarship, and finally earned about a 30% scholarship for my last two years. Ironically I had to turn down several merit scholarships just to remain on the track team. I could finally accept them after graduating and had received more financial support after leaving the track team.

There Are Better Ways to Pay For College

There is no doubt that education costs continue to rise in the US. An athletic scholarship can help with this, but that is not the only way. For the amount of time that an athlete invests in training, an after-school job can also be used to pay for some of the costs of college. Academic scholarships and need-based scholarships are also more readily available than you might think, and at least more available to many than athletic scholarships. For example, the endowments of most Ivy League schools are so large now that an individual from a low or even middle class family that manages to get accepted is essentially given a full-ride automatically. Other schools are not as well funded, but still have large programs to assist those in need and those with a variety of talents.

In addition, many parents often spend much more money in pursuit of the scholarship than they will ever get in return. The costs of summer teams, traveling leagues, equipment, personal coaching, private schools, and more all add up. I have seen many parents invest tens of thousands in their child’s pursuit of a scholarship that will never come. At that point I have to ask if the parents are in it for the scholarship, or for the bragging rights they will get when their kid gets a scholarship. Many times it is the later. As Nick noted to me, parents often force schools to put on elaborate signing day events even if their kids will simply be walk-ons in college. The idea of being wanted and seen as talented has become more important than actual physical or educational development.

Too often athletes and parents forget about fit when they chase the scholarship. You want to be in an environment that is conducive to your development as an individual and an athlete. I have seen many athletes turn down the chance to walk on at a great school with a great coach in favor of receiving a scholarship from a school in the middle of nowhere without a throwing coach. I understand finances come into this decision, but how much fun is it to be isolated from the world when your development plateaus? All too often these athletes simply quit the sport or transfer.

I mentioned one impact this mindset has on track and field: we often lost athletes that choose to specialize in other sports in the hopes of a scholarship. But there is also a negative impact from those that choose to stay with the sport. If athletes choose to focus on track for a scholarship they are neglecting the chance to build a strong multi-sport foundation and, more importantly, they are playing the sport for all the wrong reasons.

As part of the application process for the USATF Foundation Hammer Throw Grants, youth throwers are required to write a short essay. In it, many explain their goals. I frequently give minus points if I see that a college scholarship is mentioned as the primary goal. If that is driving them, I ask myself, then what will keep driving them once they reach that level?

If you look at the most successful athletes in the world with few exceptions they are motivated intrinsically. They play their sport to be better, challenge themselves, and have fun. Those that are doing it for extrinsic motivations, making money, chasing fame, or looking for a scholarship, are less likely to succeed. Because the minute they achieve the scholarship (or it becomes out of reach) they will quit. The intrinsically motivated athlete, on the other hand, will keep on working until they reach their potential. Intrinsic motivation is needed for long-term success. I don’t know how you can convince your athletes and their parents of this, but try as it is important for the health of our sport.