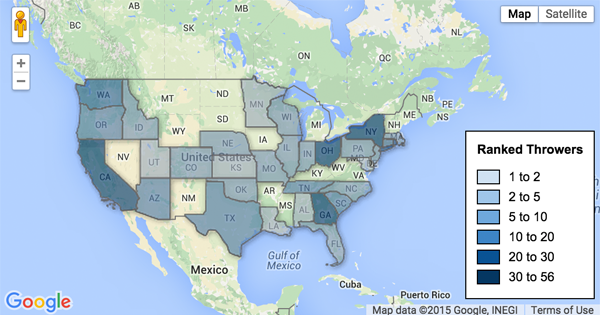 As we have written about over the past month, 2015 was a great year for high school hammer throwing. The final rankings rankings included 254 throwers, an increase of 6.3% from last year. Those athletes also hit new performance levels and some record setting performances. In addition, the geographic scope of the sport spread even further.

During the outdoor season hammer throwers from 31 states qualified for the national rankings, up from 28 states in 2014. As was the case last year, six states reached double digit totals: Rhode Island, Ohio, Georgia, California, New York, and Washington. Rhode Island was once again the clear leader with 55 throwers, down slightly from 57 last year. Big movers at the top were Ohio, who moved up two spots to second, and California and Washington both slid down two spots. The southeast also had a particularly strong year with states like Georgia and Tennessee leading the way with top results and newcomers like South Carolina moving from having no ranked throwers last year to six this season.