My men’s and women’s rankings took a look at the top performers, but there were many more moments to remember. Here is my list of the biggest hammer throwing stories of 2015. 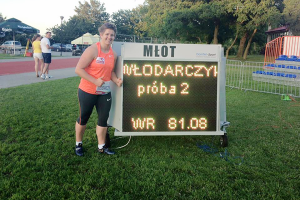 I’ve been putting together a pre-season wishlist for the past five years and each time the 80-meter barrier for women is on it. Women have been on the verge of breaking 80 meters for more than a decade. And in the past years they have come painfully close. Betty Heidler has reportedly had training throws over 80 meters and Anita Wlodarczyk tossed a sector foul that far at last year’s European Championships. However in August Anita Wlodarczyk did not just break 80 meters, but also broke through to 81 meters with a new world record of 81.08 meters.

Wlodarczyk wasn’t the only Polish star in the hammer throw this year. Pawel Fajdek also dominated the competition en route to the men’s world title, and Wojciech Nowicki snuck in for bronze. In total, half of the hammer medals were captured by Poland. Are we seeing the rise of the next great throwing power? In his analysis of all throwing results at the World Championships, Nick Garcia focused on Germany’s depth. Germany had a great year in the throws, but Poland captured more throwing medals than any other country and in the hammer Germany had no success: they didn’t send any men to Beijing and Betty Heidler had to settle for just seventh place. It seems that Poland is the wave of the future in the hammer throw.

Hammer throwers were in the headlines worldwide this summer for something different: getting naked. Amanda Bingson was one of the star’s of this year’s ESPN The Magazine Body Issue, where sports stars show of the diversity of bodies in elite sport. Later in the summer UK record holder Sophie Hitchon stripped down for the Women’s Health Magazine. Our Derek Evely even joined in on the action, although be warned before clicking on his link.

#FBF Behind-the-Scenes of my #BodyIssue Shoot. I'm receiving a lot of questions on what it was like to pose nude while hammer throwing? Well growing up in Las Vegas, bodies were everywhere and nakedness was thrown in our faces all the time. So I'd always been relatively confident about my body, and nakedness never really fazed me. They had asked if I wanted to look at the pictures while we were doing the shoot. I told them I'd rather not because I didn't want to start over thinking it. It turned out way better than I could have ever imagined. With this being my first ever photo shoot, the photographer Peter Hapak was so fun to work with. The entire crew was so professional. #BTS #JustDoIt #Flex #LetsGo #Setlife #LetsGetIt #BeHappy #Celebrate #iamsizesexy #plussize #honormycurves #nobodyshame #lovinglife #lovemyjob #bodyissue #plussize #summer #beautybeyondsize #photooftheday #espnbody #fitfam #instagood #bodypositive #effyourbeautystandards #NYAC

Speaking of strong countries and Sophie, the British throwers had a memorable year in 2015. Both the men’s and women’s national records fell. Sophie Hitchon placed fourth at the World Championships and Nick Miller showed he has future podium potential with a strong qualifying round and a win at the European U23 Championships. Mark Dry also made his first World Championship team, Chris Bennett was over 74 meters, and Taylor Campbell and Jake Norris made age group finals. Overall you could say it is the most successful year in the modern history of British hammer throwers.

5. New Names on the Block

If I were to have told you at the start of the year that both Wojciech Nowicki and Alexandra Tavernier won win medals at the World Championships but neither Krisztian Pars nor Betty Heidler would be on the podium, you would have called me crazy. But that is exactly what happened. In both the men’s and women’s finals some outsiders made the most of a wide-open field. Next year could see more of the same as the pack is so closely grouped together that just a few centimeters can make you stand out.

This is the most frustrating story of the year for me. In April the IAAF announced the Olympic qualifying standards which once again discriminate against field events. The men’s hammer throw was impacted perhaps more than any other event. Read more about it here and here. Six-time Olympian Terry McHugh also contributed a popular guest piece on how standards impacted his long career. Thankfully the IAAF just revised the standards in December, but the underlying problems are still there and will continue to pop up in the future.

While the story did not get much traction at the time, 2008 Olympic Champion Primoz Kozmus quietly announced his retirement in October. Primoz was a big influence on my development as an athlete and coach. His dominating 2008 and 2009 seasons gave him both the Olympic and World titles and made him one of my favorite athletes to watch. He first retired in 2009, before returning another bronze in 2011 and silver in 2012. But he was more than his medals. He knew his sport, as he showed in our training talk. He knew technique. And he was a nice guy. All this made him easy to root for. He’ll be missed.

8. Doping – The Beast That Won’t Go Away

The most recent headlines about IAAF corruption and systemic violations in Russia have turned the focus back on doping this offseason. Unfortunately the hammer throw was not excluded from the doping stories in 2015. The biggest positive of the year was London finalist Mariya Bespalova of Russia. Another big name was Dzmitry Marshin. He made headlines when he threw an unbelievable 79.56 meters at age 40 to qualify for the 2012 Olympics. Seems like the result was likely not believable after all. A pair of national level competitors also tested positive: Daniel Novia in Canada and K.M. Rachna Yadav in India. Perhaps the saddest positive of all is that of Ukranian Andriy Kozyr, who was just 17 when he tested positive at the start of the year.

9. The Ball and Chain

Let’s turn to a more positive topic: my guide to hammer throw came out in May and has been very popular with athletes and coaches of all levels. While objectively this is clearly not one of the stories of the year, I put a lot of time into it so I feel it deserves a mention on the list 🙂

That headline says it all. See you guys next year.