Today is Stephen Hawking’s birthday. At age 21 he was given three years to live! Never give up! 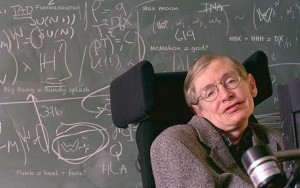 “More than five decades after his diagnosis – and now almost completely paralyzed – he is still producing new work. He was scheduled to record a talk on black holes for the prestigious BBC Reith Lectures this month. “We should never stop trying to tell these extraordinary stories from science,” he said, “and I hope my Reith Lecture will enthuse a new generation to develop ideas that will have an impact on our understanding of the world and never to be overwhelmed by the task of discovery.” The lecture was scheduled to air later this month, in conjunction with BBC Radio’s celebration of the 100th anniversary of Einstein’s theory of general relativity, though it has recently been postponed. He’s currently at work on what’s known as the “information paradox,” in which scientists are puzzling out what happens to information that is absorbed by black holes.”

Stop feeling sorry for yourself and get out and do what you need to. If you think you can’t think of Stephen Hawking.