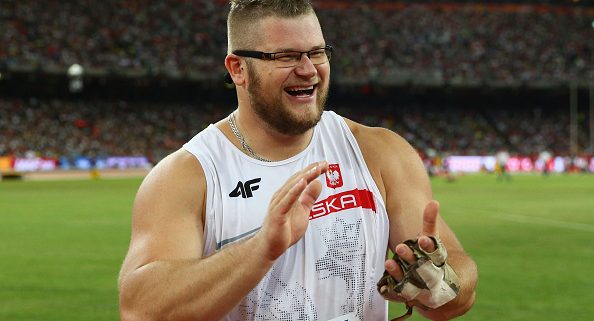 It’s that time again. The international season is about to start up and I’m eager to see the best throwers get back in the ring. As I do every year, I’ve compiled a list of the top reasons to watch our sport’s most exciting event in 2016.

1 – Rio. It’s an Olympic year, so what else could I list first other than the Olympics? Every four years the hype builds up, concerns about the preparedness appear, a few scandals are mixed in, and then all that fades away as we finally get a chance to watch the action and are treated to a new set of memorable moments. Rio will no different. For some it will be their world premiere. Others will have the chance to reach the podium for the first time. And a few will try and put a cap on their career. There will be screams of joy and anger. There will be tears of victory and frustration. I can’t wait.

2 – Happy 30th birthday world record! On August 30, 1986 Yuri Sedykh launched the hammer 86.76 meters. At the time, few would have predicted that no one would throw that far over the next 30 years. But to this day it remains the world record, and among all events it is the second oldest men’s record. If you want to learn more about the record, I recommend reading ESPN The Magazine’s article about it for the 25th birthday back in 2011.

3 – The next record hopeful: Pawel Fajdek. After a dominating victory in Beijing to claim his second world title, it is easy to forget the Pawel Fajdek is only 26. He also improved his best last year to 83.93 meters, pushing him into the all-time top 10 and producing the best throw in more than a decade. With his young age and great results he has put himself in the best position to take down the world record. In fact, he has thrown two meters better than record holder Yuri Sedykh had thrown at age 26. In an analysis I did a few years ago, the top 20 throwers of all-time hit their peak, on average, between ages 28 and 29. So Fajdek has time. But improvement is not guaranteed. Nine out of the top 20 all-time throwers also reached their best by age 27 and that is the age Fajdek will be this summer. Time might be running out for him to start closing in on the record.

4 – 82? 83? 84? Seeing a woman throw 80 meters was atop my list for years, and finally last year Anita Wlodarczyk accomplished that feat. Not only did she top 80, she jumped straight to 81 meters. What’s next? With no real challengers, her biggest opponent is herself. Can she top 82 meters? 83? More? I can’t wait to find out. And a morning women’s hammer final means I can potentially watch a new world record on the biggest stage without needing to stay up until 4am here in Europe.

5 – Will Russia compete? The big news this offseason was the provisional ban of the Russian athletic federation after doping and corruption stories unearthed a doping culture that many had suspected and heard rumors about for years. Russia has been given a chance to clean up it’s act and the team’s fate will be decided at a IAAF meeting in Vienna on June 17. Should they fail to meet the IAAF’s requirements, the most successful hammer throwing nation in history will be without a representative in Rio. I hope for everyone’s sake they clean up their mess. However, as big as the headlines are, the impact on results in Rio might be small. Last year at the World Championships Russia had no women compete and just one man was there, fifth place finisher Sergej Litvinov.

6 – Will the crack down on doping continue? Will real change come to the sport? It is naive to think Russia is the only offender, and after Russia’s ban emerged the skeptic in my asked if this was the start of real change or just political theater to place the blame on one country’s shoulders. After all, the “war on doping” has been going on for decades already with no end in sight. There has been some evidence that the ban was just a PR move, but there has also been evidence that real change might be coming. For example the also focused on other countries and given Belarus, Kenya, Ukraine until the end of the year to clean up their act too. Retroactive testing has also nabbed more athletes. However I still do not have much faith in the IAAF. Just days after the IAAF announced that former world record holder, Olympic champion, and two-time World Champion Tatyana Lysenko had her a retested sample come back positive, news emerged that the IAAF may have waited too long to retest and the bans could be reversed. The IAAF needs to get it sh*t in order even more than Russia, Belarus, Kenya, and Ukraine do.

7 – Standards drama. Continuing down the line of controversy and drama storylines, there will definitely be more standards drama this year. Last year the IAAF set absurdly high standards in the hammer. While they revised them at the end of the year, the problem was not fully fixed. As a result, I guarantee that some big names will not make the trip in Rio. The reason is that most federation’s take the IAAF standard as the starting point, not the final answer, and add on their own requirements. In 2016, qualifying for the Olympics has as much to do with where you are born than how good you are. You can throw 78 meters in some countries and not make the team. But in others you can feasibly get in with 75 meters after accepting an IAAF invitation to fill out the atrophied field. In any event, just 75 meters is likely what it will take to make the finals in Rio.

8 – The rise of the Anglosphere. As I noted at the end of the year, 2015 was historic for English-speaking countries. America sent more hammer throwers to the World Championships than it ever had before. Across the pond UK throwers broke both national records, with Sophie Hitchon placing fourth at Worlds and Nick Miller throwing strong in qualifying. Both countries have strugged to become strong on the hammer throw: America has captured just one Olympic medal in the past 60 years, while it has been 92 years since a British hammer thrower stepped on the podium. Will that change this year? Perhaps. The women seem to be the best shot as Hitchon missed the podium by just one spot last year, and American Gwen Berry indicated she may join the party after throwing a world lead and second best US mark ever of 75.11 meters last weekend. Top American thrower Amber Campbell has already improved her best too, Deanna Price broke the American collegiate record at the end of April, and Canadians Heather Steacy and Sultana Frizell will also be added to the mix. On the men’s side the next generation is rising up to support a strong cast of front runners like Miller and American champion Kibwé Johnson. A crop of young British throwers emerged last year, and young Americans (Conor McCullough, Sean Donnelly, Michael Lihrman and many more) also show promise for the future.

9 – Juniors moving on up. With all the adult action going on, it is easy to forget that the next generation of throwers coming up. The World Junior Championships will be taking place this year. Originally slated to be in Russia, a last minute switch to Poland was arranged following Russia’s ban. And Europe will debut its first ever European Youth Championships in Tbilisi for U18 athletes. But my eye will be on some of the athletes that have just graduated from the junior ranks and will be trying to make their name on the international stage already this year. For example Réka Gyurátz became just the fifth woman ever to break 70 meters as a junior last year and will be pushing towards Olympic qualification this year. Australian Matt Denny is also nearing Olympic qualification in his other event, the discus. But at the junior level there are still many stars to keep an eye on, one being Bence Halasz, who just broke Olympic champion Krisztian Pars’ Hungarian junior record.

10 – Help us Koji. Koji Murofushi has begun the next phase of his career. The Athens Olympic champion and PhD holder was named the sports director for the 2020 Olympics last year. His career in sports politics seems to be on the rise as he is also a favorite to be named to the IOC’s Athletes Commission when elections are held in Rio. Having a hammer thrower in the sport’s inner circle is key. But as we have learned in our sport over the last year, insiders do not have a history of rocking the boat in the Olympic movement. It is not just that the IAAF has dragged its feet (and even assisted in some cases) on the doping topic. Many big federations (including the IAAF) publicly criticized Marius Vizer after his criticism of the Olympic movement at Sport Accord last year. Vizer may not have chosen the best way to say his remarks, but few can doubt their truth one year later. With the future of the hammer throw up in the air, I’m hoping Koji is one of the few in the inner circle that will rock the boat and bring change to a sport. The hammer throw is attached to athletics by a thin thread; it needs to be pulled close to the sport and not cut off entirely. If Koji uses his new power, he can be in a position to start things moving in the right direction.