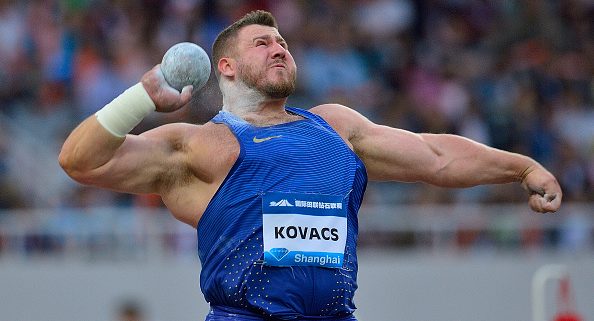 The dream of every thrower is to be an Olympian, and every four year the top 24 athletes in each event get the chance to fight it out for that opportunity to be one of their event’s three representatives on the world’s best team. In some events, like the men’s shot put, it will be nearly as difficult to make the team as it will be to get on the Olympic podium in Rio. This year the battle goes back to Eugene Oregon from July 1 to 10, and all the throwing events feature great storylines, close competition, and more. Below we break down what to expect in each of the men’s throwing events. Click here for our guide to the women’s throwing events.

With so many shot putters having the Olympic standard, Olympic qualification will be straightforward in this event: the top three finishers make the team. That makes the competition to make the team fierce. But the competition to win looks to be weaker than normal. A few years ago the shot put was one of the most competitive events in the US. But recently it has developed into the Joe Kovacs show. He enters the Trials as the clear favorite as his last two meets have again been over 22 meters, and no other American has shown themselves capable of that distance so far this year.

Behind Kovacs you have two groups of throwers: the veterans and a young group of recent college grads. The performance level of the veteran group has dropped off this year, but their ability to perform under pressure could still push them onto the team. Ryan Whiting is slowly coming back from injury and is well off of his 2013 form that dominated competition. Reese Hoffa has yet to break 21 meters this year, but has made three teams in his career. Experience will also help 2004 Olympic Champion Adam Nelson who has come back this year in an attempt to make his fourth Olympic team. When Nelson does something he goes all in. Therefore it is hard to imagine him planning his comeback if he didn’t think he would be able to make the team and, as it looks, that is a real possibility. One name missing from the start list is Christian Cantwell who has competed just once this year.

Among the younger generation Ryan Crouser and Kurt Roberts lead the way. Crouser won the NCAA indoor title, and competed just four times outdoors. But he recently beat out many contenders, including Ryan Whiting, with a personal best in Chula Vista earlier this month. Roberts was the US indoor champion, but his performances at major meets have been inconsistent. At the 2014 national championships he hit a personal best, but last year placed just 15th. he is the only American to have beaten Kovacs this year with his win at the Shanghai Diamond League meet. Two other throwers to watch are Darrell Hill and Jordan Clarke. Hill, a recent Penn State grade, broke 21 meters for the first time at the recent Chula Vista meet. And Clarke qualified for his first World Championships last year, but has been slightly off that form so far in 2016.

After a breakthrough year in which he won his first national title, Jared Schuurmans looked to be the favorite to make the Olympic team heading into 2016. But the men’s discus has stepped up this season. In addition to Shuurmans, six more athletes have reached the Olympic qualifying standard this year and all are within a few feet of each other heading into the Olympic Trials. Schuurmans is just one of the pack this year.

Rodney Brown has been the most consistent and also compiled some strong international experience this year, winning the IAAF World Challenge meets in Hengelo and Kawasaki, as well as the Mt. SAC relays. It has been years since an American has been this competitive on the international circuit. His only loss to an America this year was a third place finish in Jamaica behind Tavis Bailey earlier this month. Bailey had a slower start to the season but has been on fire the past six weeks with strong wins in Salinas, Tucson, and then the Jamaica earlier this month.

Of course Schuurmans is in the mix as well as top qualifier Sam Mattis from the University of Pennsylvania. However Mattis has not thrown over 63 meters since the start of April and finished just second in the same ring at the NCAA Championships this month. Recently throwers like Mason Finley and Andrew Evans have proved more consistent. There is also a strong contingents of veterans that will be trying to make the team. Jason Young has come back this year to hit the standard. Surprise 2012 champion Lance Brooks and perennial contender Russ Winger are both ranked in the top 10, but neither has yet hit the Olympic qualifying standard.

With so many discus throwers making the Olympic qualifying standard this year we are unlikely to have any selection confusion in that event like we did last year. But the hammer throw is a different story.

As with last year the leading contenders are Kibwé Johnson, A.G. Kruger and Conor McCullough. Neither have faced each other much this year, so it is hard to handicap. Johnson and McCullough had some injury troubles this spring that have lead to inconsistent results. Johnson had a good start to the season but struggled recently in some international competitions. McCullough, on the other hand, started slow but has gained momentum. Kruger, as always, has been consistent throughout the season.

One name added to the mix is NCAA runner-up Rudy Winkler. He is the second best qualifier, and also threw 77.78 meters from last weekend, although the USATF has yet to accept the mark. If that mark is accepted it would make him the only thrower who has surpassed the Olympic qualifying standard. In any event, he has been closer to 70 meters during the rest of the season and, even if he has the standard, he will have to beat either Johnson, Kruger, or McCullough to get on Team USA under the selection procedures as all are in line to receive invitations from the IAAF based on their world rankings. Currently the three are ranked 22nd, 25th, and 26th in the world during the Olympic qualifying period. He has a tough task ahead of him. But Winkler is also a sign of things to come for American hammer throwing. Of the top 10 qualifiers, three are just 21 years old, including Winkler, and six are 25 or younger.

Cyrus Hostetler has returned to form this year and enters the competition with the clear best qualifying mark, but it will be a close battle on the fourth of July. The University of Oregon grad will have home field advantage, but he has been far from dominating this year and recently lost to Riley Dolezal at the Harry Jerome Classic. Track and Field News has tipped Dolezal as the favorite, but Hostetler will be right there too and Ben Woodruff has also joined the 80 meter club this year.

Two big question marks surround defending champion Sean Furey and another local star Sam Crouser. Both were on the World Championships team last year and entered for the Trials, but Furey has not had any results this year and Crouser has struggled just barely over 70 meters so far this year.

Other names to look for are former NCAA champion Sam Humphreys, who has been consistent this year, and current NCAA champion Curtis Thompson enters the meet as the second best qualifier. Former NCAA Division III champion Tim Van Liew has produced a strong season too and is in the mix for a podium finish as well.

While the competition might be wide open, the Olympic team seems pretty settled. Only three athletes – Hostetler, Crouser, and Furey – have the Olympic standard. Barring a big breakthrough from the rest of the field, they should be headed to Rio no matter their finishing positions.