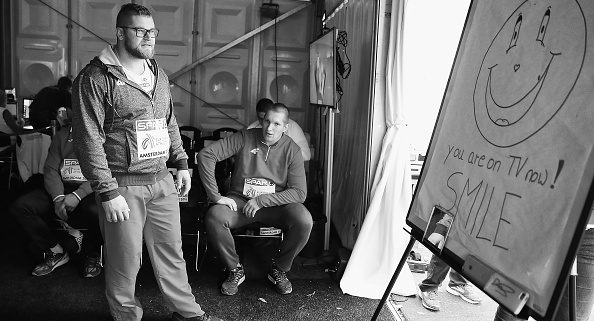 I don’t know if you could ask much more of yetersday’s women’s hammer final. As I predicted it was the Anita show. But she did it in style by breaking 80 meters three times, surpassing her own world record twice, and setting the new mark out an amazing 1.21 meters beyond her old world record. In addition Sophie Hitchon captured the UK’s first medal in the event with a clutch sixth round national record. And two Americans placed in the top eight. Thankfully, that was just the start of the hammer throw action. The men join in on the fun tomorrow.

&start Related content: Nick and Martin preview more throwing events in Rio on this week’s episode of the HMMR Podcast.

In the men’s competition Poland will look to complete its hammer sweep and Pawel Fajdek is as much of a favorite as Wlodarczyk was in the women’s hammer. While a world record is not on the table, if he also adds a meter to his best – as his teammate did – we could see a new Olympic record. The competition also features a deep field, strong contengients from the US and UK, and a fast ring that looks ready for some more big throws. Bring it on!

The Field: 33 athletes from 24 different countries will compete in the hammer throw. In order to compete, athletes were required to achieve the Olympic qualifing mark of 77.00 meters during the relevant period. The initial standard was actually higher, but the IAAF lowered the standard when not enough throwers had reached it already this winter. Even then, the standard was too high and the IAAF invited many athletes to Rio without the entry standard to ensure a full field.

Qualification Round: All athletes will participate in a qualification round on Wednesday night (9:40am Rio time). Each athlete will receive 3 throws. Athletes who throw over 76.50 meters will automatically move on to the final. If less than 12 throwers hit this mark, then the top 12 finishers will awarded a spot in the final regardless of distance. Therefore in reality this means that a throw of 74 or 75 meters will be enough to qualify for the hammer. For example last year at the World Championships it took a throw of 74.51 meters. At the last Olympics it took just 74.69 meters. British statistician Ian Tempest has looked at this topic in depth and agrees that, if anything, it will be slightly easier to make the final this year compared to London.

Final Round: The men’s hammer final will take place on Friday evening (9:05pm Rio time). In the final all 12 throwers will receive three attempts, and the top eight will receive another three attempts. Athletes will be ranked on the best of their six attempts. Marks from Friday’s qualifying round are not counted in the finals.

As with the women’s competition the question is less who, and more a question of how far. Fajdek is the clear favorite in the men’s hammer, with the added benefit that he seems to be still improving while his competition grows older. No one can keep up with him this year and his average margin of victory this has grown to 3.39 meters in 11 finals.

Can someone beat him? It would take a combination of a very good day for a challenger and a horrible day for Fajdek. To put his dominance in perspective, Fajdek has 12 of the top 14 results in the world this year. He will really have to be off his game to lose. The biggest story in fact might not be his competition, but his story of redemption. Fajdek had a strong 2012 season and looked positioned to earn his first major championship medal in Rio, but fouled out in qualification. That might be the only thing that can stop him as he works towards his first Olympic podium this year. But he seems to have learned from the experience and is unlikely to foul out again. Since 2012 he has dominated the hammer, starting with his first world title in 2013 at age 24 and now 29 straight victories since March 2015.

The reason Fajdek seems to be increasing his dominance is because his two top competitors this year are aged 34 and 40. Nazarov is the younger of the two and also the most consistent. After years of slow improvement Nazarov won his first global medal last summer with a runner-up finish at the world championships. Both last year and this year he has proven to be Fajdek’s closest competitor this year. In five competitions against Fajdek this year he has placed second four times and third once. What is most interesting is that he has been consistent in every meet. Little more than a meter and half separate his best and worst performance of the year and, as I always say, consistency leads to medals in the hammer.

You would be hard pressed to find someone with a more complicated doping history that Tikhon. Back in 2008 he was stripped of his Olympic bronze after a positive test along with his countryman and silver medalist Vadim Devyatovskiy. In 2010 they were given back their medals on appeal due to some technical errors. However the appeals panel went out of their way to state the decision “should not be interpreted as an exoneration.” Devyatovskiy went on to become the President of the Belarusian federation, while Tikhon started a comeback. But on the eve of the 2012 games his sample from the 2004 Olympics was retested. After it showed a positive results he was kicked off the Olympic team for London, stripped of his 2004 silver (which had originally been bronze until Adrian Annus was disqualified too) as well as his 2005 World Title. In addition, he had to serve a two year ban starting in 2012. Are you following me? If not, no worries. The situation was so complex that the IOC decided not to give his 2004 medal to anyone else.

This doping story will loom over Tikhon’s performance at the games just as it did at this summer’s European Championships. Fans there found it an insult when athletes, including Tikhon, wore bibs with the statement “I throw clean.” But what people might overlook is the fact that he is a strong threat to medal. In Amsterdam he took the silver. He is the only thrower besides Fajdek to have thrown over 80 meters this year. And along with Nazarov is the only person who has come close to challenging him in a meet. Like him or not, he is one of the top medal contenders in Rio.

Lomnicky has stayed under the radar recently, but has been consistently tossing throws of 76 to 77 meters this year and has qualified for every major final since the 2012 Olympics. The Virginia Tech graduate also placed fifth at the European Championships earlier this summer.

At age 37, Söderberg is another experienced athlete. Like Lomnicky he has found consistency in that 75 to 77 meter range. Last summer he placed 6th at the World Championships and this year was 7th at the European Championships.

The yearly lists are crowded with throwers over 77 meters, but not all marks are created equal as very few can hold that level consistently. Some throwers are just inconsistent, while others are just questionable. This makes it difficult to predict the outcome as nearly everyone can make the final. But, that being said, there are a few more names that stand out. Mihaíl Anastasakis (GRE) is the second youngest thrower in the field and, like Al-Saifi, reached a new level this year. He claimed fourth place at the European Championships in July. Serghei Marghiev (MDA) took eighth at the European Championships. The crowd will be rooting for Wagner Domingos (BRA) who had a big South American record of 78.63 meters earlier this year. But he has yet to come anywhere near that in a championship.

After reading through the favorites you might notice one big name missing: defending Olympic champion Krisztian Pars (HUN). After skipping the European Championships it was unclear if he would even be making the trip to Rio due to injury issues. He has since confirmed he will compete, but his form is still lacking and he threw just 73 meters in his last two meets. At age 34 this will be his fourth Olympics and he has never placed lower than 5th place. So don’t count him out completely.

The US and UK also both send full teams, a rarity for both countries. It is hard to pick favorites from the US team. Rudy Winkler (USA) made a big breakthrough in June and then went on to win the US trials, but has yet to find consistency at his new level and has the least amount of experience on the team, a factor which affected Gwen Berry on the women’s side. Conor McCullough (USA) placed the highest for the US at last year’s World Championships and missed the final by just one spot. Kibwé Johnson (USA) also looks to be in top shape again after an offseason injury and rough start to the season. He made the finals in London and looks like he might be the best bet to do that for the US again. He’s definitely my pick, although I am obviously biased here.

From the other side of the Atlantic Nick Miller (GBR) had a solid year last year in which he set the British record and made the World Championship final, but the NCAA champion has been off of his normal form so far this season. In his last three meets he fouled out, threw 67.76 meters and then 71.38 meters. Chris Bennett (GBR) has been the strongest of the Brits this year, with wins at the British Trials and Fränkisch-Crumbach, as well as making the finals at the European Championships.

The IAAF’s ban on Russian means that some contenders will also not be there, like Sergej Litvinov, who was fifth at least year’s world championships. Despite making a strong case for his clean history, the IAAF decided that all Russians are banned regardless of their individual histories. On the flip side this means that athletes like Aleksey Sokirskiy, who placed fourth in London while competing for Ukraine, will also not be making the trip to Rio as a result. Unfortunately, even without the Russians, Rio will not be clean.