Earlier this week we celebrated the 30th birthday of the men’s hammer throw world record. When a record lasts that long, the inevitable question is whether it will ever be broken. The chances do not look good in the near-term future. Pawel Fajdek’s throw of 83.93 meters last year is the only all-time top 10 mark in the last decade and the winning distance at this year’s Olympics was the lowest since 1984. In the long-term many top coaches think a bigger throw is possible, but it will not be easy. It will require the sport to progress in terms of training methods, culture, and more. Below two Olympic champions share their thought on the future of our event.

What is Physically Possible?

Before we look at whether anyone can throw 87 meters, it might help to see if it is physically possible in the first place. Two men in history have thrown over 86 meters, so asking them provides a good starting point. Olympic champion holder Sergey Litvinov traded the world record with Sedykh back in the 1980s and in speaking with him last week he told me 87 meters is possible since he did it himself. One week prior to the 1986 European Championships he threw 87.30 meters in training, with his rival looking on and Sedykh’s caoch Anatoliy Bondarchuk pulling the tape.

Bondarchuk feels Sedykh could have also broken 87 meters. His world record came about because training had lined up perfectly at the time, but now with 30 more years of experience he looks back and sees what he could have done differently as a coach:

“If someone came to me now with the same talent of Yuri he could do more. I would change the methods. For example before we took a lot of throws, sometimes 40 each session. Others would even use 80 per session. One shot putter would do 100 standing throws each session and threw 21 meters. Dylan took only 20 throws per session and had 22 meters. Now I find 20 throws is enough.”

A further throw is physically possible. Granted this was the 1980s, the heyday of steroids. But top hammer throwers now are bigger, stronger, and faster than their 1980s counterparts. Testosterone is not the online thing keeping current throwers from the world record. According to both Litvinov and Bondarchuk, it is two factors are primarily holding the sport back: training culture and training methods.

Competition is a Performance Incubator

A central tenant of capitalism is that competition is good. Competition forces companies to innovate and stay ahead of the game by producing better products. In the end this competition benefits consumers by creating better products at a lower price. Many Soviets disagreed with that economic theory, but they agree with the theory applied to sport. More competition brings out the best of athletes. More often than not, world record performances come about when a group of athletes reach a high level together. Think of the high jump in 2013 and 2014. After 20 years of seeming untouchable, the world record was being scared nearly every meet in part because five jumpers were clearing 2.40 meters. They pushed each other to a higher level. it was the same when Christian Taylor scared the world record in the triple jump last year. He had been the best in the world since 2011, but it was only when competition had emerged that he was pushed to a new level and teamed up with Pedro Pablo Pichardo to produce five of the eight best performances ever.

To say there was competition among Soviet hammer throwers was an understatement. Even after 30 years, five of the top ten hammer throwers of all-time were Soviets active in the 1980s (Sedykh, Litvinov, Igor Astapkovich, Igor Nikulin, and Jüri Tamm) as well as another Olympic champion (Andrei Abduvaliyev). As Bondarchuk put it: “It was a big strong group that wanted to push each other. It was a different psychology since they all wanted the gold medal.” 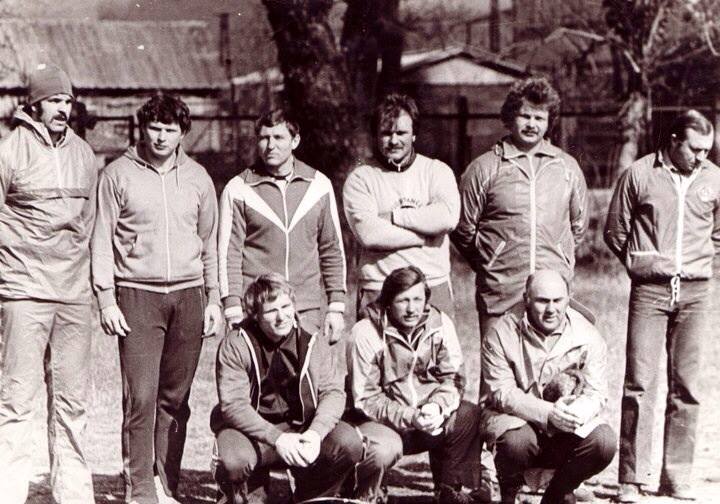 Some of the all-time best throwers together at a Soviet training camp in the 1980s.

It is not just that there were a lot of good throwers at the same time, but also that they essentially lived together. As I described above, Sedykh witnessed Litvinov throw over 87 meters in training. How much do you think that motivated him in his final preparations for the the European Championships. Litvinov explained:

“We were together something like 260 days a year, training and living in the same place. This was a huge benefit, now the top throwers live in different countries and see each other just a few times a year at competitions. We were always watching each other and trying to do better. It is natural that if you see something new, you will try to make it working for you.”

Looking back at the world record competition Litvinov said his good preparations also motivated him. He knew it was going to be close and planned accordingly:

How can you not have a great competition when the athletes enter knowing it will take a world record to win?

Is Training Evolving or Devolving?

This culture not only had a motivational factor, but also acted as an accelerator for new training ideas. Coaches were also together for 260 days a year and that resulted in what Litvinov called an “an intensive exchange of information.” They would debate, discuss, and try out new ideas just as doctors or scientists work together in hospitals or labs to move forward together. Bondarchuk described this environment as a big idea laboratory: “You start with an idea, a hypothesis, and try it in practice. But it is only an idea if it does not work.”

Now that dynamic is gone, and the progress of training methods has virtually stopped. Litvinov put it to me more bluntly: “The methodic do not developed in the last 30 years, there was a regress.” In speaking with Bondarchuk he gave me a more concrete example:

“Now I speak to the coaches and the knowledge has not increased, it has decreased. Ideas always need to change. In the 1970s and 1980s everyone used light and heavy hammers. Now the Russian national coaches ask me why Dylan was throwing different implements?”

It is not that coaches do not know how to make their athletes strong. Top throwers now are as strong or stronger than throwers 30 years ago. But they focus so much on that they are losing out on how to turn that into results. You could say this is just two old men complaining about the good old days, but if you watched the average thrower in Rio you would have to agree. In an interview five years ago, Sedykh felt that coaches and athletes have taken their eye off the ball, pun intended. “Athletes are always looking for some secret Soviet exercise or program, and this makes damage to them,” he says. “The most important thing is for them to understand the vision of the global movement, of the dance. This is my philosophy.”

Give It Some Time

As you can see, it is an uphill battle for someone to break the hammer throw world record. But despite this I am optimistic because we have one thing on our side: time. The longer our event exists, the more athletes that will try it, and the higher likelihood that we find our sport’s Usain Bolt. It’s a numbers game. The more throwers we have, the more likely we will find a genetic freak in there. Therefore in addition to exchanging ideas and working together, the best thing we can do as coaches is recruit more people to the hammer throw if we want to see the record fall any time soon.