At the end of the day medals are important, but they can be a misleading metric of which countries are powerhouses in the world of throwing. Just a few athletes can lead you to the top of the medal tables, but a true throwing nation is about more than the strength of a few athletes. Therefore, with the help of Nick Garcia, we have once again taken a look at two different metrics to rank the top throwing nations in the world: points totals and number of finalists. The points table is a basic weighted calculation of the top eight finishers in each event. Nick has scored the Olympics as if it were an American high school or university championship: give the top eight places 10-8-6-5-4-3-2-1 points respectively. The number of finalists is just a basic count of how many athletes each country placed in the top 12 to make it past the qualification round.

→ Related content: Nick Garcia breaks down the 2015 World Championships by the numbers and ranks the top countries.

As was the case last year, Germany came out on top of our rankings. The main difference compared to the 2015 World Championships was that the competition was actually close last time. In Beijing the Germans dominated even though they did not have Robert Harting. This year Harting again scored no points as an injury kept him from the final, but his brother made up for it by capturing gold. What really hurt Germany this year was the loss of 14 points in the javelin, and well as both the men’s and women’s shot put due to disappointing performances by Christina Schwanitz and David Storl. Despite all this they had the most points by a comfortable margin. The reason for this is because they have strength in numbers. They do not depend on just one athlete for their points; they bring a team. Germany had 14 finalists, twice as many as the next best country. They also were the only country to have a finalist in the shot put, discus, hammer, and javelin. And looking across genders they had finalists in 7 of the 8 events. Poland came closest on that metric with finalists in 5 of the 8 events.

After Germany were the same players: USA, Poland and China. The only difference was their order. The USA moved up to second with their points coming almost entirely from the shot put. Poland dropped slightly after favorite Pawel Fajdek was unable to make the final in the hammer throw, but still ranked highly due to the size and depth of their team. Fourth ranked China and fifth ranked Croatia both used similar strategies: they only scored points on the women’s side. As was the case last year, China scored in all the women’s throws. Along with Poland and Germany, China was the only country to score in all four throwing events. Croatia had less depth but leaped up the rankings thanks to double wins in the discus and javelin.

Overall a few more countries scored points this year. At the Rio Olympics 30 nations scored points, compared with 28 at the 2015 World Championships. In addition, 39 countries placed athletes in the finals (top 12).

The US was hands down the best shot putting nation with two gold medals, three total medals, and another athlete in the top five. Neither medalists were favorites, but the shows the depth of American shot putting. The women were also just three inches short of placing all three women in the final. Overall they scored more than twice as many points as any other country and their 32 points was 13 points higher than any country in any throwing event. In short, no country dominated a throwing event like the US did in the shot put. The next best shot putters came from New Zealand, who took home two medals and had another finalist in Jacko Gill.

Also interesting to note is the geographic diversity in the women’s shot put. It was the only throwing event with every continent represented, with finalists from non-traditional throwing countries like Cameroon and Chile.

Even without Robert Harting Germany picked up two medals and big points in the men’s discus to rank first in the event over Croatia (i.e. Sandra Perkovic). While the women’s shot put was perhaps the most diverse event, the women’s discus was the least diverse. With three Germans, three Chinese, and two Cubans, only 7 countries were represented in the final, the fewest among the throwing events.

Again a big powerhouse lost a favorite here, but still came out ranked first. Poland took home the women’s gold and men’s bronze for 16 points. Without the extra points from Pawel Fajdek, Belarus and Tajikistan (i.e. Dilshod Nazarov) closed the gap in second. The men’s hammer throw continues to be a European-dominated event, with eight of the 12 finalists from the continent. However interestingly it had more countries represented in the final than any other throwing event. Eleven nationalities were represented and the top 8 all came from different countries.

With the javelin, Germany claimed a top ranking in its second event. Again, it did so with numbers. It had six finalists, the maximum number possible and the only country to reach that in the throwing events. While they captured gold and 15 points in the men’s javelin, the Germans have to be scratching their head about how they only managed one point with three finalists in the women’s competition. 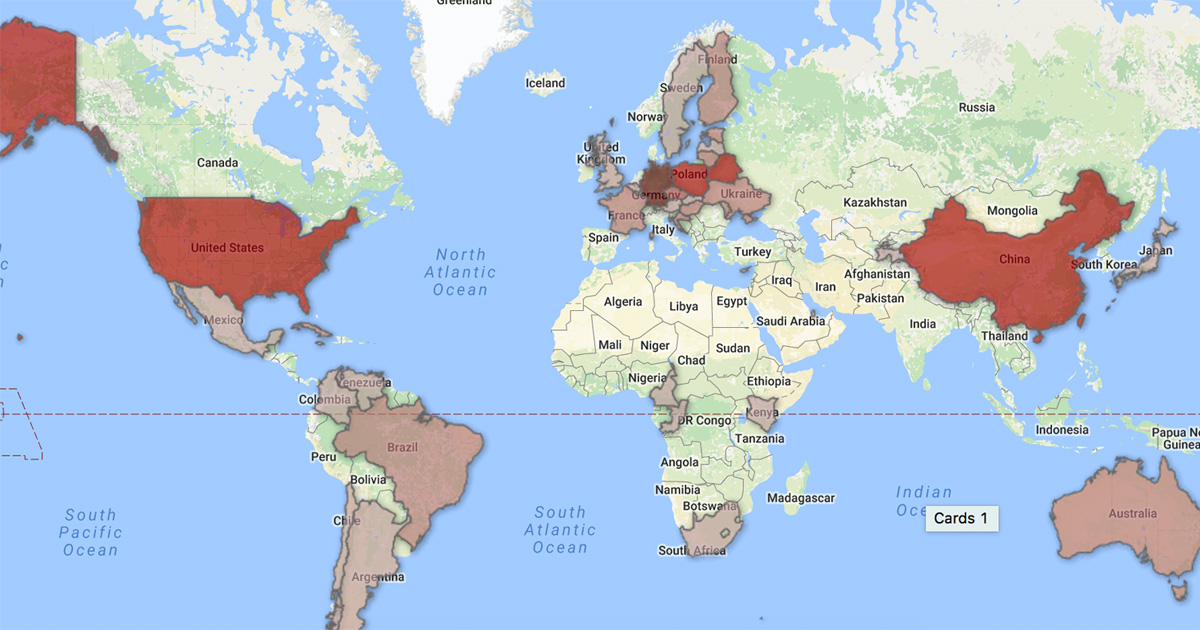