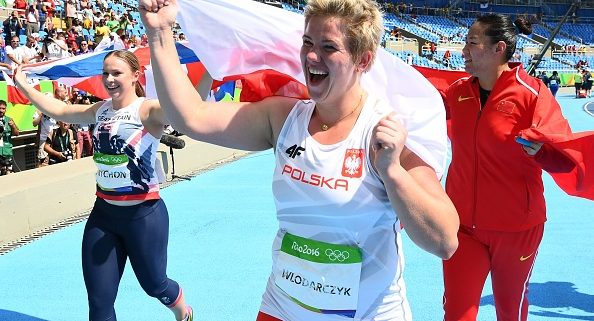 I’ll get straight to the point . . . this year the women’s hammer was about one thrower: Anita Wlodarczyk. The sport has never seen such a dominating figure. In fact 2016 was the first time the season’s best in the women’s hammer was better than the men’s hammer. But putting together the rankings after her was not as easy as throwers scrambled to position themselves. Below you will find my top 10 rankings for 2016. Feel free to share your thoughts and opinions in the comments.

→ Related content: earlier this week we ranked the hammer throw’s top 10 men in the world.

As with the men’s rankings, we want to remind you that the rankings are a subjective evaluation of who had the best season this year. In coming to the final rankings I look at following factors, listed in their order of importance:

Wlodarczyk is the obvious choice to repeat the honors she won last year and has now captured for four straight years. The list of accolades is nearly endless for Wlodarczyk this year. She was not just undefeated, but dominated at a whole new level in 2016. Her average margin of victory this year was by more than 6 meters. And that was not because she was avoiding competition: the regularly lined up against the best throwers and kicked their asses. She even won the Olympic gold by 5.5 meters and had four throws over the previous Olympic record!

Her season was so strong that I think that she had the best case to be named the sport’s athlete of the year. No other athlete controlled their event the way she did in 2016. The IAAF did not have the guts to pick a field event athlete and went with some more mainstream but less dominant athletes. But Track and Field News and Athletics International both named Wlodarczyk their athlete of the year, the first time for the women’s hammer throw.

Zhang’s resume is thin, but it is hard to argue with her position here. She competed only once outside of China but on that occasion threw the second best mark in the world to win Olympic silver. Despite two losses at home to her countrywoman Zheng Wang, she won a slew of other competitions including her only other international competition, the Beijing IAAF Challenge.

As has become the trend, luck was not on Heidler’s side at the Olympics as she was bumped off the podium on her final attempt by Sophie Hitchon. However a strong season’s best, a silver medal at the European Championships, and a 2-to-1 head-to-head record against Hitchon move her up on spot on this year’s rankings.

Already as a young thrower Hitchon proved she was a big meet performer by winning the World Junior Championships and making the London Olympic finals with a UK record at age 21. Both last year and at this year European Championship she showed she was ready for a breakthrough at the senior level with fourth place finishes. Then in Rio it arrived with a UK record and bronze medal toss in the final round.

Petrivskaya, formerly Marghieva, returned from a doping ban last year and found her form again this season, taking fifth place at both the Olympics and European Championships. Her younger brother also made it on to our men’s rankings.

Campbell earns the highest rank ever for an American after a strong season which saw her extend her personal best at age 35. Campbell also nearly ranked higher but lost two out of three competitions to Petrivskaya, including the critical Olympic final.

Wang had a poor Olympic showing where she fouled out after making the final. However, unlike Zhang, she competed more often outside of China – second place finishes in Ostrava and Halle -which helped keep her in the rankings.

Skydan is already threw 74 meters as a junior, but had failed to put it all together at a major meet until this season. Still just 24 years old she was the surprise bronze medalist at the European Championships and also took home two more podium finishes on the IAAF Hammer Challenge circuit this year and barely missed the Olympic final.

At age 23, Price is the youngest athlete on this year’s rankings. Due to the restrictions of the NCAA season she competed less internationally than any ranked athlete except Zhang. But that was not by her choice and her consistency, along with an Olympic final appearance, help her make her rankings debut.

Fiodorow did not have one signature competition, but was one of just a few athletes to make both the European Championship and Olympic final