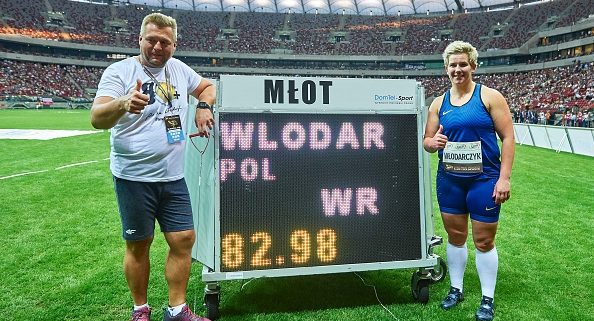 As is the case every year, 2016 was filled with highs and lows in the world of hammer throwing. World records were set, and former record setters athletes were banned. New athletes arrived, and old athletes retired. The Olympic men’s hammer final lacked some luster, but overall the year more than lived up to my expectations. Below is my list of top hammer throwing stories from the past year.

I had hopes for a world record in Rio, but in the back of my mind I knew it was an outside shot. The finals would be held in the morning for the first time ever, which makes it more difficult to achieve top performance. Wlodarczyk did not have any competitors at her level to push her. And rarely can athletes hit world records in consecutive seasons.

I felt like a fool for having any doubts after watching the Olympic final on August 15 as Wlodarczyk put on one of the most dominant performances in Olympic history. She led from start to finish, tossing four throws over the previous Olympic record and two throws over the previous World record. In the end she added 1.2 meters to the world record and won the competition by an impressive 5.5 meters! Most people predicted she would win, but few predicted she would do it in such a fashion.

Pawel Fajdek entered the Olympics as strongly favored as Wlodarczyk. He had 12 of the top 14 marks of the year heading into the games, had an average margin of victory of more than three meters in 2016, and was riding 29 straight victories dating back to March 2015. But of course on game day none of that matters. All that matters is how far you throw. Fajdek had three attempts and manage a foul, 71.33 meters, and 72.00 meters. He finished in just 17th place, ten meters off of his season’s best.

It still isn’t entirely clear what happened. He seemed healthy. He seemed fit. In fact just two weeks later he improved his world lead to 82.47 meters. Likely the pressure of being such a heavy favorite got to him. In any event, on the biggest favorites at the Olympics fell and it was the surprise of the year.

Despite Fajdek’s failure, Poland’s Olympic grade remained good overall. They still picked up bronze in the men’s hammer and ranked as the top hammer throwing nation yet again in our annual ranking of throwing nations. But elsewhere in the rankings there were some changes. Germany, once a throwing powerhouse, sent no men to the Olympics in the hammer. Non-traditional powers like Venezuela, Brazil, Mexico, and Qatar sent athletes to the final. The men’s hammer even featured 11 countries amongst the 12 finalists. The sport truly is becoming more international.

5 – The Rise of the Anglosphere

I am a native English speaker as are most of this site’s readers. So you will have to put up with some additional coverage of throwers from English speaking countries. In that vein, it was an exciting year for the Anglosphere. The UK sent both men and women to the European Championships final, with Chris Bennett becoming the first man since 1990 to do that. Later in the summer the UK sent three men to the Olympics in the hammer for the first time since 1988. The US also sent a full team for the first time 2000. But for me the most impressive feat was that 3 of top 8 women in the Olympic final were from English speaking countries, a drastic change since 2012 when there were none.

One country not represented in the Olympic final, or anywhere on the Rio track, was Russia. Their track and field team was banned back in late 2015 and the ban was upheld at the last minute. Russia clearly had some bad things going on, but the blanket ban on all athletes meant that some athletes and potential medalists with more sympathetic stories, such as Sergej Litvinov, were also banned. The general media and public consensus was in favor of this decision. It will be interesting to take a poll again in 10 or 20 years: did the ban actually help clean up the sport?

The Rio medals were not the only Olympic medals awarded this year. After the whole Russian mess, the IAAF and IOC sped up their process of reanalyzing old championship drug samples. As a result 2012 Olympic champion Tatyana Lysenko was stripped of her gold and Olympic record. 2008 champion Oksana Menkova was also stripped of her title. And London 5th place finished Kirill Ikonnikov, who had already tested positive post-London, also had his Olympic result disqualified after retesting. These are not the first medals to be reallocated, and won’t be the last either. The sad reality of the modern Olympic era is that all the medalists do not make the initial podium.

8 – The Standards Keep Getting Harder

In 2015 the IAAF implemented a new qualification system for major championships with the aim to better estimate the number of athletes in each event. After two seasons, we see the system has failed in that regard. While it is no surprise to fans, the standards were unfairly difficult in the field events. The main result of the new qualification system has been in general to restrict the number of field event athletes while the number of sprinters and runners continue to grow. It was harder on the hammer throw than any event: both men’s and women’s events required the IAAF to add athletes to the field below the standard and the men’s event had more such invitations than any other event. The 2017 standards appear to finally also clamp down on the sprinting events, but the field standards are just as hard so we’ll have to wait for the final verdict.

In the name of making the sport better, the IAAF and the Diamond League decided to change the structure of finals in both the Diamond League and the World Junior Championships. Without prior warning or consultation with coaches, they decided to only give the top four throwers six attempts rather than the previous norm of top eight throwers. The move was an utter failure with outcries from athletes, coaches, and media. At least this time the IAAF could admit it’s mistake: if you look at the fine print of their recent press release about the 2017 Diamond League season you will see the new rule has been discarded already.

The first story was record related as so is the last story. Yuri Sedykh’s world record of 86.74 meters turned 30 years old at the end of August. The chances are small that it will fall any time soon, so the best we can do is look back on that amazing toss and learn from it. We talked with Sedykh’s coach and his main rival about the record earlier this year in writing a tribute and asking what it will take to break the record. We also chatted about it on our podcast. Those are great starting points to learn more about what it takes to throw 86 meters.