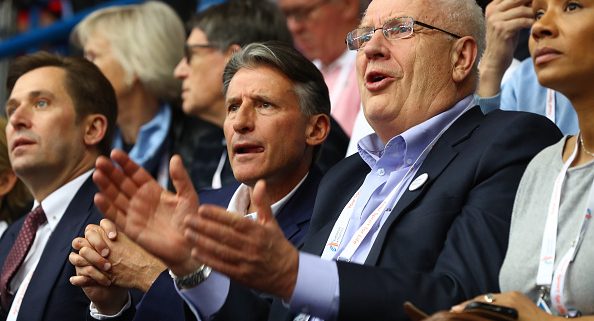 In the baseball world, the term “eyewash” is thrown around a lot. It’s used to describe players who try to look real busy but really are not accomplishing anything at all. Just as eyedrops make your eyes look better without fixing the underlying problem, eyewash is something you do that looks good but doesn’t actually accomplish anything.

European Athletics is on a role when it comes to innovation in sport. Last year they proposed eliminating the decathlon. This week they announced a proposal to reset the world records in track and field. Their proposal, which must first be approved by the IAAF Council this summer, would essentially reset all records to the best performance at a major competition since 2005. There have been calls for a reset for years, but this is the first concrete step towards action. However, just like putting “I Throw Clean” on start numbers, the proposal does little to clean up and give credibility to our sport. My opinion is that this is all just eyewash.

Is It Time For a Reset?

We can debate whether whether all current world records are tainted, but we cannot debate how tightly drugs have been woven into athletics for the past half century. If we want to move forward as a sport, I think we need to consider a records reset. Forcing athletes to constantly judge their performance against a doped standard will inevitable increase the incentive to dope.

There is a good argument for a blanket reset over invalidity individual records as it is administratively and legally easier. We have no hard proof on most records, so picking individually records to reset would be rife with speculation and light on facts. Weightlifting did this by adjusting the weight classes in 1993 and again in 1998. It might prove well for athletics to do the same.

That being said, I do not agree with the European Athletics proposal. The biggest issue is that the “clean athletics era” did not begin in 2005. If we reset records, we need to do it right. If we don’t, then it just appears to be a public relations ploy.

Bringing Credibility Back to Athletics

Sports scientist Ross Tucker wrote about this topic on his blog on Wednesday and noted that “The nature and timing of the world records is a constant reminder that there is a lack of believability in those performance.”

Whatever date we choose should help return credibility and believability to the sport. Choosing 2005 as the start of the clean athletics era hardly does that. As Australian record holder Benn Harradine notes, many current performances are hardly believable:

Reset the world records they said, sport is cleaner now they said. ??

Look at all that has happened since 2005:

On the one hand, the recent positive retests are a sign of progress. But it also shows us how much work needs to be done, as we know we are just catching a fraction of the cheaters. It is laughable to say that the clean athletics era began in 2005.

The clean athletics era did not begin in 2005. Let's actually clean things up before we reset records. Click To Tweet

If you actually look at who the record holders would be, it gets even more funny (or scary). Ivan Tikhon may become the new men’s world record holder as he has the top result at a major championship since 2005. Also interesting is that Yelena Isinbayeva would be the world record holder in the women’s pole vault. This is the same woman that the IAAF has banned, along with all other Russian athletes, since November 2015 as the IAAF does not believe their performances despite no positive test. This is the same woman the World Anti-Doping Agency has openly criticized for being counterproductive to anti-doping efforts. Yet the IAAF would keep her record over others as it happened in the right time frame.

We need to believe in our sport again before we reset the records, and I frankly do not believe in many performances since 2005.

How to Move Forward

While there are positives to resetting records, there are also other complications. Do we also reset national records? If so, then maybe I become national record holder, which is laughable as there have been many clean (and a few dirty) Swiss throwers before me who deserve that honor. What about marks from the pre-doping era: should they be considered if strong enough?

Rather than reseting the records from 2005 or even from today, I think the better solution is to focus on fixing the problems first. While testing might have improved in Russia, the entire clean up process has stalled due to difficulties in bringing the doping mindset and culture forward. We also know Russia is not the only problem and there have been no meaningful steps taken against perennial offenders like Belarus, Turkey, Ukraine, Ethiopia, Kenya, and Morocco. This is a chance we may only get once. Let’s use this right. Once we make some progress, then we can look at a records reset. The first priority should be actually cleaning up the sport. Until then, this is all eyewash.