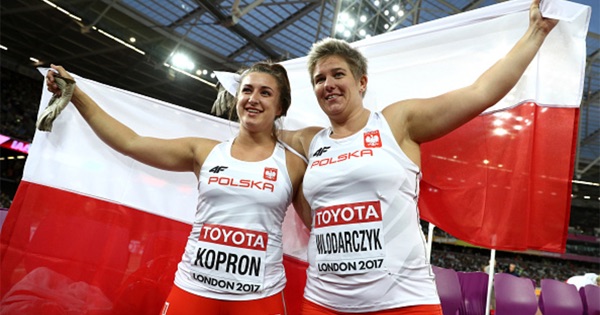 The best throwers in the world faced off at the World Championships this month for a chance at individual glory. At the same time, London also gave countries a chance to prove they were the best. Achieving the top team ranking is about more than producing one champion; it can only be achieved by having depth across multiple throwing events. As we have for the past two years, we ranked the top throwing countries by giving the top eight finishers in each event 10-8-6-5-4-3-2-1 points respectively. The results this year were a bit surprising and showed a changing of the guard.

» Related content: Last week we ranked the top countries across all events.

What was the best throwing country in 2017?

Since starting our rankings two years ago, Germany has maintained a strong lead. They won by 19 points in 2015 and 9 points in 2016. Taking the pole position this year, however, was Poland. Their team was led by a strong effort in the hammer throw and multiple top eight finishers in four of the eight throwing events.

Poland actually only scored one more point than they did at the last championship. Therefore you could say that Germany lost the title just as much as Poland won it. At the last World Championships Germany scored 64 points. This year just 24. As a result they fell from first to fifth rank overall. America, ranked second in Rio, also slipped down to fourth position.

China was close behind in second position this year and was the only country to score points in every throwing event. What is even more interesting is that all of their points came from the women’s side. That’s an impressive feat, but history also has taught us many lessons about teams that have disproportionate women’s results. Led by strong javelin results, the Czech Republic also moved from 10th to 3rd place. America took third place, with nearly all points coming from the shot put. Germany made up for a a weaker discus with strong javelin results.

Overall 25 countries scored points in 2017, down from 30 at the Olympics last year.

America retained its title as the top shot putting country with a silver medal in the men’s shot put and bronze in the women’s shot put. In total they scored 19 points, down from the 32 points and two gold medals they won in Rio, but still very strong as they had five finalists in the shot put. China sent three women to the shot put final to score 14 points for second place.

Without Germany’s normal dominance, the discus throw showed the most parity of the throwing events. Nothing demonstrated this better than the podium where the men’s title was captured by a mere two centimeters and the women’s final also featured a close competition. Croatia and Lithuania scored the most points, but both had just one athlete leading their team. In terms of number of finalists, both Germany and China led the way with three finalists each. Also of note is that Jamaica had two individuals score points in the men’s discus, a rarity for the sprinting powerhouse.

No country dominated one event like Poland dominated the hammer throw. They walked away from the meet with four medals: two gold and two bronze. They sent five hammer throwers to London and the worst one placed sixth. In the end they had nearly triple the number of points as the next best country, China. Russia, competing as Authorized Neutral Athletes, also picked up substantial points with two men in the hammer final.