One of the big questions people asked after this year’s world championships is how track and field would move on without Usain Bolt. The legendary sprinter, who has been the headline name in the sport for the last nine year, is now officially retired. It is not just his performances that the sport needs, but the void created by his entertainment skills will be even harder to fill. Directly after the World Championships IAAF President Sebastian Coe told the Daily Mail that personalities have slowly become a rarity in track and field and we need more characters in our sport. I couldn’t agree more.

Step into the time machine

Perhaps my favorite article of all time was coverage of the 1970 U.S. Indoor Championships by Sports Illustrated. When you read the article it sounds like it is describing another planet. First off, it mentions an American indoor track meet with over 15,000 spectators. Perhaps more eye-opening for me is the fact that America’s leading sports publication essentially dedicated 2,000 words to the pranks, antics, and gossip among weight throwers. The article is so effective because the personalities of each athletes. There’s the eccentric George Frenn, who’s psychotherapist told him that a self-destructive wish led to his fouling problem. There’s “father time” Harold Connolly, the tough veteran who everyone wants to both beat but also be respected by. There’s the focused Ed Burke, as well as other competitors.

Perhaps nothing exemplifies some of the personalities more than this story about the rivalry between Frenn and Burke. Their story sounds more likely to come from a high school locker room than from the top athletes in the world:

There was Frenn’s dog, a German shepherd puppy that he named, ah, Burke. And there was this meet that Frenn decided to sit out. Burke was competing. Frenn showed up with his dog. “Hey, Burke, I want you to meet my dog,” he said. “His name is Burke. I named him after you.”

For the rest of the afternoon, every time Burke picked up his weight, there was Frenn yelling, “Hey, Burke, come over here and sit down. Burke, cut that out. Burke, quit licking my face.” Burke, the human, didn’t do very well in that meet.

“Gosh, I don’t think that bothered him,” Frenn said last week, somehow managing to look like a 5’11”, 240-pound imp. “Ed kept calling me a son of a bitch, which made me know he liked me. Everybody knows any act of aggression is really an act of love. Besides, I was very good to that dog.”

More than how the profile of the sport has changed, exchanges like this are what stood out to me as the biggest change in the sport over the past 50 years. I can fathom a indoor track meet selling out still. I can also see a major publication potentially profiling a thrower. But can you imagine this type of article being written about track and field today? I can’t. And it wasn’t the only article; Sports Illustrated put Frenn on its cover later in the year and Brian Oldfield a few years later. It’s no coincidence that the two throwers to grace to cover of Sports Illustrated were not the best throwers of their era, but they were some of the biggest personalities the sport has seen. 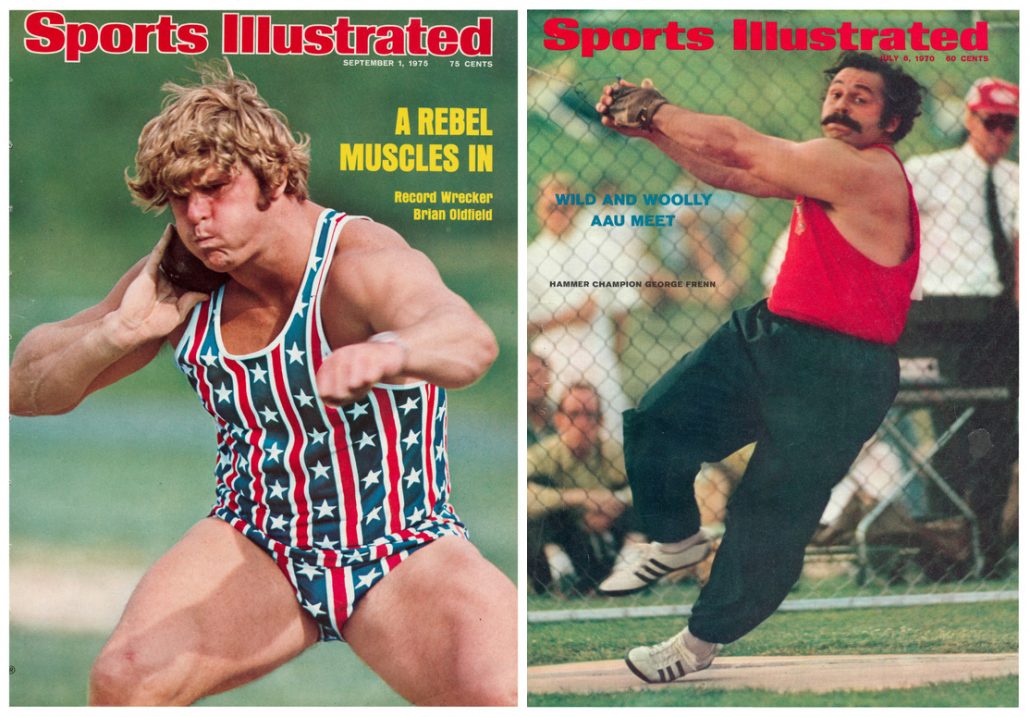 It’s not that these personalities do not exist any more; it’s just that they’re hidden. As much as the sport has changed, the athletes haven’t. Even Coe agrees, saying that the problems is that the sport does not present these athletes well enough, and the athletes do not present themselves well enough. He focused his comments on the later points, noting that “I sense sometimes the agents and the managers are sitting there curtailing that kind of engagement. We have a young reporters’ program from all backgrounds and they think our athletes are less communicative and less engaging and engaged than a lot of other sports.”

In many cases this is true, but even Bolt is guilty in this regard. If you have seen nearly every interview with Bolt, you know what I am talking about. He strives to avoid any misstep or controversy, and doing so means his responses rarely offer insight into the man himself. Even after watching his documentary “I Am Bolt” I did not feel like I knew him better; I only knew his team better including his coach, who was the highlight of the film. For me this is the difference between being an entertainer and being a engaging personality. Entertainment is one-directional, but personality is two-way and requires engagement and depth. Bolt may have been the top entertainer in track and field, but he was hardly the top personality.

I think the bigger issue is the one that Coe glossed over: the sport itself has to promote these personalities. By investing so heavily in Bolt they have sent the message that entertainment was more important than personality and I think many athletes got that message. And the IAAF and others have neglected a huge opportunity to use major events as a platform to launch new personalities. Tune into to any major meet over the past few years on BBC and you’d often see a countdown clock until when Bolt (or Mo Farah, who also retired from the track this year) would run. The time between races is then spent talking more about Bolt. The personalities are out there; the sport just needs to focus on them.

As much as I criticize Coe and his cronies for being out of touch with the sport in the past, he has a good understanding of this point. He mentioned world champion hurdler Karsten Warholm as an example of what he is looking for and he is right on the money. So are individuals like Sean Donnelly in the hammer throw, who is not afraid to use social media to give us an innovative look into his training rather than just the standard pretty pictures from training and competitions around the world. The athletes are there; the IAAF and major meets just need to focus on them more so that fans learn about them and other athletes follow their lead.