Another month, another edition of Sports Science Monthly. In this edition, we take a close look at exercise genetics, placebo and expectancy in the Premier League, the use of different predictive models to improve training and performance, a look at precision medicine in sports, and then we wrap things up with our quick-fire round-up. 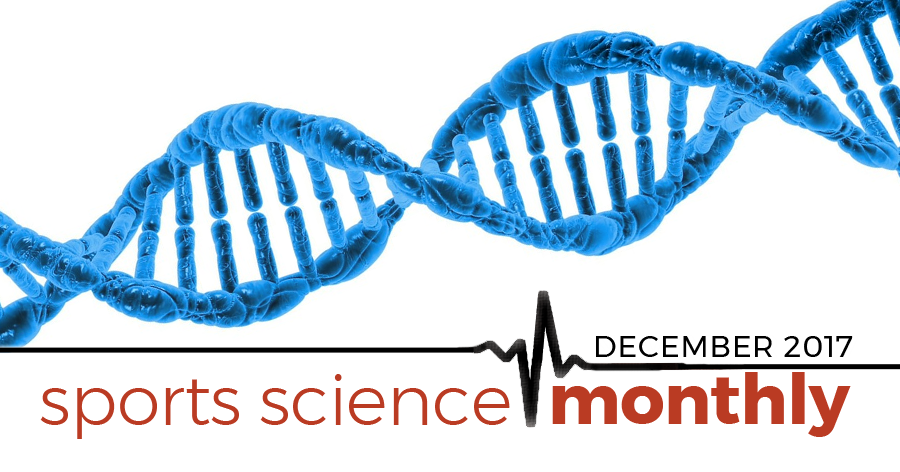 Exercise genetics: the need for clarity from the noise

» Quick Summary: Genetic testing holds a huge amount of potential for performance enhancement, but only when the evidence is solid and plausible; there are still some answered questions that need exploring in order for us to be able to produce robust evidence based guidelines on the use of genetic information in sport.

I work for a genetic testing company, which means that I have an interest in understanding if and how knowledge of a person’s DNA can impact their life. This can be through the prism of nutritional changes or lifestyle interventions, but the area I’m perhaps most interested in is that of exercise genetics; how do our genes affect both our sporting performance and our adaptation to exercise. I’m so interested in it, in fact, that I’m part way through a doctorate from the University of Central Lancashire, with the research question “Does genetic testing have utility in elite sports”. Like many breakthroughs, what happens in elite sport often trickles down to the general public; training, for example, began with athletes attempting to enhance their performance, and now many of us do some form of physical training on a regular basis. This means that there is the potential for what we find in terms of exercise genetics in elites to affect non-elite athletes, which, given that we’re currently in the midst of an obesity epidemic, and all its associated co-morbidities, could be important.

How science (usually) works is that researchers conduct an experiment, analyze the data they collect, write it up, and then try to publish it in a journal. Other researchers and interested parties – like me – can then read that information, which we can use to inform further research, or change the practice of what we do at present. The more times a research result is replicated by other bits of research, the more concrete that result becomes, and the more confidence we can place on applying it to the real world.

However, sometimes the research is confusing, and might lead to misinterpretation – and this was a topic that myself and John Kiely recently tackled in the BMJ Open Sport & Exercise Medicine Journal. An example of where our knowledge is currently lacking is that of a gene called CREB1. One study found that variation in this gene was a strong predictor of the heart-rate response to exercise, and those with the A allele at a specific position had a smaller reduction in heart-rate during an exercise test following training. Because CREB1 is implicated in long-term cardiac memory, the potential mechanism here was that these gene impacts how the heart adapts to exercise, and those with the A allele see a smaller adaptation following aerobic training. But a second study, by a different group, found that those with the A allele had a greater increase in body temperature with exercise. Because this increase is unpleasant, they thought that perhaps this would alter the motivation to train of those with the A allele. In this case, A allele carriers would potentially have smaller improvements from training because they are less likely to want to exercise at intensities that give those improvements, as opposed to any direct biological mechanism affecting the heart. In this particular case, the genetic variation doesn’t directly affect VO2max in terms of oxygen demand or delivery, but it either affects training performance (which indirectly alters VO2max improvements), or performance on a test that measures VO2max. So, here we have the same finding – that CREB1 impacts aerobic exercise adaptation – but two different potential mechanisms. Either, both, or neither mechanism could be true, but if we want to use this information to inform training programme design, then we need to better understand the mechanism in order to give individualized advice.

Another example is that of TTN, which encodes for a protein called titan, found in muscle. Variation in this gene has been found to impact improvements in VO2max following aerobic training, with the proposed mechanism being that variation in these gene affects the elasticity of the heart, altering how much blood it can pump out. However, a second study found that variation in this gene affects the length of the fascicles in our skeletal muscle, with T allele carriers having shorter ones. This is thought to lead to improvements in running economy. In this case, the gene would modify the endurance training response, but instead of doing so through altering oxygen delivery during exercise, it does it by altering how much energy is used. Again, both, neither, or only one mechanism could be true, but without knowing it makes it hard to use this information to inform what training our athletes should do.

Finally, we have a gene called COL5A1, which encodes for a type of collagen found in muscle fibres. One study found that the CC version of this gene was associated with a protection from exercise associated muscle cramps (EAMC) compared to the TT genotype. If this is true, then it could affect how we approach the training and nutrition of TT genotypes in order to reduce their risk of cramp. However, if we look closely at the data from that study, we see that the CC genotypes were also significantly slower in an ultra-marathon when compared to TT genotypes. As we know EAMC is potentially caused by fatigue, it could we be that the TT genotypes got cramp because they were more fatigued (due to being much faster over the course) than CC genotypes. If this latter hypothesis is true, then it means we perhaps don’t have to pay specially attention to TT genotypes in terms of their reducing their cramping risk.

Alongside some of the issues I’ve discussed underpinning the mechanisms of the impact genes have on the training response, there are other questions that we don’t yet have the answers to. The first pertains to exercise non-responders, the term given to those individuals who show no improvements with exercise. As I covered in an article earlier this year, these people probably do exist, but only in terms of a specific measurement at a specific time. What isn’t clear is how much of this is exercise response is “true”, i.e. caused by genetic and environmental factors, and how much is “noise”, i.e. measurement error or normal statistical variation. The statistics issue is well covered by Greg Atkinson and Alan Batterham in their paper “True and false interindividual differences in the physiological response to an intervention”, and, since they will do a better job of explaining it than I can, I’d suggest you read their paper. But, even if the statistics aren’t in question, it still remains to be seen how stable this exercise response or non-response is over time. That is, if you give 100 people the same weight training programme, and get 20 non-responders, if you give them the same training programme again, will they still show no response? We don’t know, because as far as I’m aware, that’s never been studied.

Similarly, are these response and non-response trends, if they do exist, consistent across different cohorts? For example, in a group of Caucasian and African-American sedentary individuals, variation in a gene called ACSL1 was found to explain roughly 6% of the variance in exercise adaptation following an aerobic training programme. Whilst it might not sound like much, being able to explain 6% of the variance through a single gene is unusual – it’s twice that of ACTN3, the well-known “sprint” gene. However, in elite endurance athletes, this gene variant was found not to be more common, which, given that elite endurance athletes likely respond very well to aerobic training, you might think it unusual. In a group of Chinese subjects, it only had a marginal association with aerobic fitness. At present, it’s not clear whether genetic variation affects training and untrained athletes to the same extent, so again more research is required to figure this out.

Based on what I’ve written so far, it may seem like there are a lot of problems in the exercise genetics research sphere, and there are. But there are also many more concrete findings that we can have a lot of confidence in. For example, ACTN3 is a gene that is well researched; we know now that it impacts muscle fibre structure, which in turn alters fibre type percentages, improvements following strength training, and muscle damage following eccentric training. Knowledge of this genotype can, therefore, be used to inform training programme design. There is an abundance of other genes that have similar levels of evidence. Back in 2016, I was part of a research team that used a genetic algorithm comprised of 15 such gene variants to personalise training in almost 70 university athletes. The key outcome was that those who did genetically matched training, as predicted by a genetic test, saw greater improvements in both power and aerobic endurance than those doing genetically mismatched training. Research such as this had led the development of evidence based guidelines for the use of genetic information in training modifications, which further research over the coming years will only strengthen. Recently, I illustrated that a genetic algorithm comprised of seven genes may predict the magnitude of fatigue following a sprint session; whilst this study had low subject numbers, and needs to be replicated in a larger cohort, it nevertheless signals both the effectiveness and utility of genetic information in informing training methods when the biological mechanism is both well understood and scientifically tested.

So, what does all of this mean for the coach? As with everything that is new, genetic testing is exciting. However, it is important to place the research in context; whilst some genes have a strong impact on exercise, others have an unclear role to play. It’s crucial to be selective in the genes that are chosen to be analysed, otherwise the information presented could be misleading and misinforming. Indeed, this isn’t unique to genetic testing; it’s true of all sports and training science; genetics is just a useful way to explain this. Overall, coaches should ensure that there is a strong causal mechanism between the interventions they are making and the outcome they want, or at least a number of replicated research studies supporting the intervention being made, otherwise there is the concern that it might just be a correlation between the intervention and the outcome, as opposed to the intervention actually causing the improvement.