You can learn a lot from athletes’ biographies, especially from someone who innovated like Fosbury did. There are many lessons to be learned from his new book The Wizard of Foz: Dick Fosbury’s One-Man High-Jump Revolution

, both about sport and life through the chronicles of his rise to Olympic Champion and beyond. 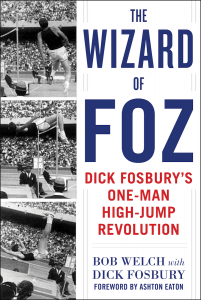 It is well framed in the context of growing up in the fifties and coming of age in the turbulent sixties. Fosbury developed his technique without coaching and in many ways in spite of coaching. This is a little pearl I go from the book regarding Fosbury’s in competition mental approach in preparation for a jump:

Enjoy the book it is an entertaining and informative read that brought back many memories from a bygone era in track and field.