» Related content: Listen to GAINcast 99, where Vern and Martin look at this topic and more in discussing fitness and endurance training for team sports. 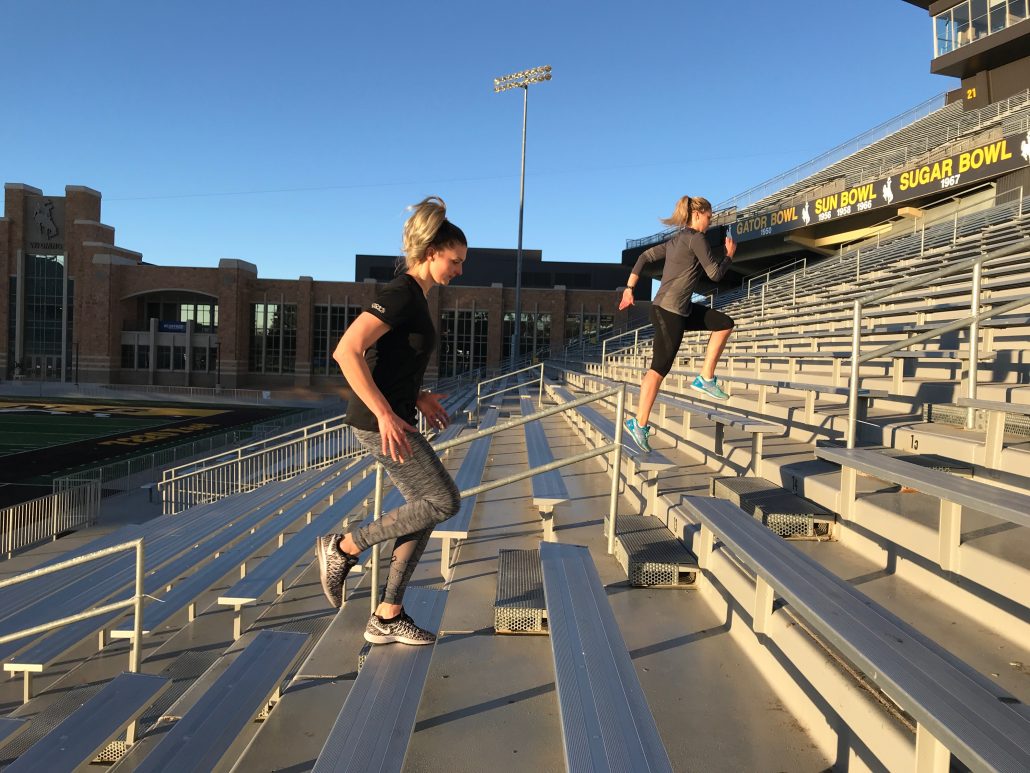 To enhance work capacity, it is important to choose the appropriate method based on the demands of the sport, the phase of training, the position or event and the athlete’s individual needs. Traditionally the most common and preferred method of training to address the aerobic component is continuous work. This work is designed to improve vascularization of the active muscles and enhance the muscles’ physical, chemical and metabolic characteristics. It consists of work in an aerobic zone for a prolonged period of time. This method works well and is particularly appropriate for the endurance sport athlete; i.e., the swimmer, middle distance and distance runner, or cyclist who is capable of pushing themselves and sustaining a sufficient workout tempo to achieve a training effect. I have found this method to be less effective with the intermittent and transition sport athletes who are used to uneven bursts of effort and do not have the ability to “push themselves” to get a training effect any more than just feeling tired. For example, take a 6’ 8” tall and 260-pound basketball forward and ask him to run thirty to forty minutes continuously at seventy percent of maximum heart rate. It won’t happen! Any resemblance to good running mechanics is purely coincidental; mechanics will quickly fall apart, and it becomes a plod or a slog (slow jog). The net effect is significantly increased impact forces without stressing the cardiovascular system to the degree necessary to elicit the desired training effect.

The challenge is adapting the continuous method to meet the needs of these non-endurance athletes. One particularly effective solution is what I call the 1/3 workout. You pick three different modes of aerobic work in order to maintain the intensity of effort. For example, with our basketball player mentioned above, his primary emphasis is running because it is a primary demand in his sport. Start out by creating a menu of the means of aerobic training modes available. For our basketball player we will use the following menu:

From the menu pick three activities in priority order. By priority order I mean if the athlete has to run as their primary activity in their sport then that should be placed first in the work so that done first when they are fresh to insure quality in the primary activity. After that the criteria for choice of the activities is to go from highest impact to lowest impact. Determine a target for total training time, for example thirty minutes. Then divide that time period into thirds. The first ten minutes is a run, then immediately switch to the next preferable mode, for example stair stepper, for ten minutes. At the completion of that go to the third, the lowest impact method, for example slide board, for ten minutes. This enables the athlete to complete thirty minutes of continuous work at a higher intensity effort than if he would have “run” for thirty minutes. It is not perfect, but it works. Remember this is not going to produce a high level 10K runner but it will enable those athletes not used to or unable to push themselves to get a very beneficial aerobic training effect. It is a means to an end.

The second method of work capacity development is the variation method, also called Fartlek, which is the Swedish word for speed play. Think of this as high-level game or race simulation. It is a continuous workout where intensity is varied throughout until the target time of the workout is reached. Within games there are various activities that occur in different combinations and at varied intensities that comprise the movements of the game. The variation method affords the opportunity to incorporate all those varied movements and intensities into a workout that will simulate the demands of the game. The workout can be designed to be more specific to positions or to how an individual plays the game. The variation method can be very structured or loosely structured depending on the objective. It can be inner directed, driven by the athlete or structured to respond to demands from the coach to perform various activities throughout the workout. For the non-endurance athlete one fartlek workout a seven-day microcycle for a maximum of six workouts is sufficient to achieve the desired training response. For the endurance athlete this is a great workout to simulate the various changes of pace that occur throughout the race. It is a race hardening workout.

The following is an example of a variation workout for soccer. It is called the “Smorgy” to describe the variety of activities that are incorporated. This particular workout is a game hardening workout done late in the preparation phase. It is placed on Saturday, the sixth day of a training week when cumulative fatigue is highest to achieve a game simulation effect. It is a very difficult workout! It consists of six segments done continuously. The runs should be varied in direction involving curves, angles and cuts. Remember the goal is to simulate the demands of the game and in the game very little running is straight ahead.

Another way to structure fartlek workouts that is less movement specific, but still very demanding metabolically is to pick a target time that you would like your athletes to achieve in the fartlek workout. For example, forty minutes. Then devise a logical progression to get the athletes to that time goal. Assign a specific number of hard efforts for each time period. For example, ten efforts between 30 and 90 seconds in twenty minutes, then let the athlete determine the actual distribution. This allows you to control the density of the workout, but the athlete can control the intensity. I have found it takes a more mature athlete with a good work capacity to get a good training effect from this method. For the less mature athlete or the team sport athlete “Whistle Fartlek” is especially effective. The procedure is the same, but the coach blows a whistle to begin the hard effort and then blows the whistle again to signal the end of a hard effort until the number of hard efforts in the target time is reached.

The third method of work capacity development is the interval method. In many ways this is the most effective and applicable method for the non- endurance athlete. It is very quantifiable and can be made very specific. It is the best method to develop an aerobic component with a minimal sacrifice of explosiveness. As the name implies in this method of training the focus is on the interval of work and rest. By manipulating the length, duration or intensity of the interval relative to the length of the rest interval the training effect can be significantly altered. I break interval training into two classifications adapted from the work of Gerard Mach, former national Track & Field Coach of Canada. Rather than base the intervals on heart rate I choose to use perceived exertion. I have found that teaching the athletes to tune into their bodies by learning a percentage of maximum effort has a very good carryover to their sport.

Mihaly Igloi, the Hungarian middle distance and distance coach whose training system was based on interval training based the intensity of interval work on the following descriptors of effort: The gradations were progressive leading up to race effort:

These descriptors are a perceived exertion scale. The Borg Scale used extensively in exercise testing and cardiac rehabilitation scientifically validates the concept of this scale. This is a method to get the runner to tune into their body and feel the effort required by the particular interval. I have found this to be an especially effective system to help the athlete to learn the feel and the rhythm of the required effort.

The first is Extensive Tempo intervals (ETE). This consists of work at 80% or less of maximum effort. This is aerobic interval work. This type of work should be the focus for the soccer, basketball, lacrosse, or field hockey player who wants to improve aerobic capacity and power. The simplest extensive interval workout is repeat 100 meter runs with 30 seconds rest.  The 100-meter runs are done in the range of 70 – 80 % maximum effort. Over the years this has proved to be an effective way to reinforce correct running mechanics and still get a good aerobic training effect:

The key to this workout is the athlete’s ability to hold the rest interval while maintaining the pace of the runs.

Another very effective extensive interval workout to improve max VO2 is the 30/30 workout. This simply consists of a 30 second run at 70% effort followed by 30 seconds recovery. The recovery can be walk or a jog. This workout can be easily adapted to modes other than running i.e. slide board or bike. If you use a bike add about 25% more repetitions.

A good high school basketball perimeter player should be able to do 21 to 24 reps of this to be considered fit to play. A post player at the same level should be able to handle 18 to 21 repetitions. A professional soccer midfield player should be able to do 30 repetitions at 75%. It is best placed in the general preparation foundation block of training, although it also effective to bring it back occasionally in the early competition block.  My experience was that this workout significantly raised max VO2. As Veronique Billat, has shown this particular work to rest interval done at vVO2 has will raise max VO2, raise the lactate threshold and improve running economy. This workout is effective to raise fitness levels if used once a week for six weeks.

If you so desire, you can use Billat’s vVO2max Six minute run test to determine a specific distance to run for the 30 seconds and then you can run the recovery 30 seconds at 50% vVO2 max. From our previous example the athlete who covered 1560 meters in the six-minute test had a vVO2 max of 4.3 m/sec; the he would run 130 meters in 30 seconds and 65 meters during the recovery 30 seconds. This figure is arrived at by multiplying the vVO2 max by 30 seconds. Personally, I have not used this approach on the 30/30 workout because it does lend itself well to a group setting so it is not very practical to use with a team. I prefer to teach the athlete the feel of effort by using Igloi’s terms. I find this has better carryover to the game or race.

The second interval training classification is Intensive Tempo Endurance (ITE). This consists of work between 80-90% of maximum effort. It is mixed aerobic/anaerobic work. It is very taxing and results in significant residual fatigue if overused. It is usually used in a ratio of one intensive interval session to every three to four extensive interval sessions.

Staircase 30’s Plus Max Run  – This workout addresses the spectrum from sustained aerobic to anaerobic lactate production work. It is a very good workout for the intermittent and transition game athlete during a special preparation block of training.

The most demanding and intense work capacity method is the Repetition Method. It is used to improve economy of effort. It is characterized by a high intensity workload alternated with complete rest to allow for full recovery between repetitions. It is also called special endurance. It is work in 90%-100% effort range. An example would be a 45 second all out run for distance with 15 to 20 minutes recovery, followed by another 45 second run all for distance. Compare the distance of the two runs to evaluate the workout. From track and field 3 x 200 meters at 95% intensity with 15 minutes recovery is another example of the repetition method.