Lots of new topics in the December edition of Sports Science Monthly. Our first study looks at the role of genetics in endurance programming. We also look at research on whether athletes eat enough, monitoring acute:chronic training loads, biomarkers, acceleration performance, and some interesting new research on tactical periodization. 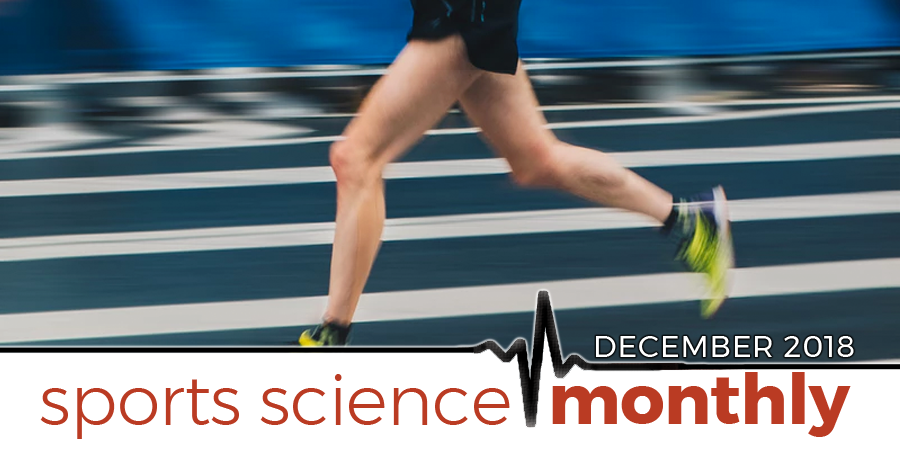 » Quick summary: Whilst we’ve long understood that the response to training has a genetic component, it is only recently that we’ve start to understand which specific genes play a role in this aspect. Moving forward, there will be interest in using knowledge of an individual’s genotype to match them to the most optimal training type for them, in order to maximize their adaptations. In this study, myself and a group of other researchers used a genetic test to identify players expected to see smaller and larger improvements in aerobic capacity following training, and then compared this to improvements in aerobic fitness following an eight-week training block. We found that the genetic test was useful in identifying the expected training response within this group of athletes.

Aerobic capacity is an important aspect within many sports, especially those that are intermittent in nature. In general, the greater the aerobic capacity of a given athlete, the longer they can exercise for at a set intensity, and the quicker they can recover from high intensity exercise. In general, higher level professional team-sport athletes have a greater aerobic capacity than sub-elite and amateur players, and some studies have demonstrated how enhancing aerobic fitness leads to improvements in football performance.

As a result, aerobic training is an important aspect in team-sport training. Over the last couple of decades, research has demonstrated how there is inter-individual variation in response to a training stimulus, including that of aerobic training, although often in non-athletes. A number of genes have been proposed to potentially explain part of this individual variation; for example, variation within a gene called PPARGC1A, which encodes for a protein involved mitochondrial biogenesis, has been shown to affect both absolute VO2max levels, as well as the magnitude of improvements in VO2max following an aerobic training program. Whilst this information is interesting, one limitation is that genes tend to have a very small effect, and so only explain small amounts of the variation between individuals. One way to overcome this is to combine a number of genes into a single algorithm. A second limitation is that, at present, research using genetics in sports and exercise science tends to focus on explaining the differences between people, as opposed to being able to use that information to predict what will happen in the future.

Recently, I was fortunate to be lead author on a study published in the online journal PLoS One which sought to further our knowledge in this area. Here, myself and my co-authors recruited 42 players from a youth football team into an eight-week training study, where they undertook small sided games training sessions aimed at enhancing their aerobic fitness. Both before and after the training intervention, the players undertook a Yo-Yo Intermittent Recovery Test, which has been shown to be a valid and reliable measure of aerobic fitness. They also undertook genetic testing through my employer DNAFit (which, from a full disclosure stand point, represents a conflict of interest that you must consider). Within the DNAFit reports, there is a section which looks at five different single nucleotide polymorphisms (SNPs), which are small changes at a particular section of a gene that can impact its function. These five SNPs have previously been implicated in either affecting aerobic fitness, or the magnitude of improvements in aerobic fitness following exercise. We used the genetic results to classify the players into those we would expect to see the smallest improvements in aerobic fitness following training (the “low” group in this study), those we’d expect to see moderate improvements (“medium”), and those we’d expect to demonstrate the largest post-exercise improvements in aerobic fitness (“large”).

So what does all this mean? In this particular case, it appears that, at group level, the 5 SNP genetic test had some success in identifying those players who would see the largest and smallest improvements following an aerobic training program. At an individual level, the results were also quite promising from this perspective; in the “low” group, no player had an improvement of greater than 120m. In the “high” group, 70% of the players improved by more than 500m, and all the players had an improvement of greater than 120m. In the “medium” group, all but two players (who, surprisingly, got worse) improved by more than 120m. Being able to identify players who may show smaller improvements to a training intervention, before that training intervention occurs, could be hugely useful, as it may allow for a different training intervention to be undertaken in those players, maximizing training efficiency and reducing the chances of undertaking training which won’t elicit the required changes. Whilst this study is not without limitations—we had a small number of subjects, only 42, for example—it nevertheless represents a step forward in being able to use genetic information to inform training program design. Future research will be needed to explore what alternative training methods may be effective—such as plyometric exercises—for those expected to see smaller improvements following training, to see if we are able to improve everyone’s performance, just via different methods.