The March edition of Sports Science Monthly focuses on the latest research on squats. Hopefully we can give some answers to the age-old debate about whether deep squats and shallow squats are the best. We also look at training frequency and session volume, several recent doping studies and much more. 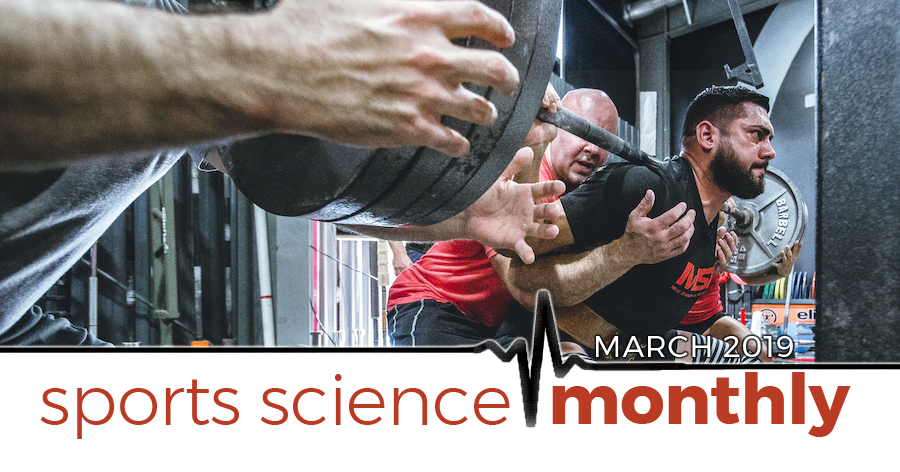 » Quick summary: Internet message boards are awash with debates regarding the effectiveness of different types of squat stance. This study suggests that deep squats are generally superior, but that, in certain situations, a shallower squat might be fine.

Visit any strength training internet message board, and you’re sure to come across people arguing for the superiority of one type of squat over another. Whilst there are many different squat versions out there, typically the biggest point of contention is around squat depth; is it better to squat deeper—but typically lift less weight—or have a shallower squat with more weight? An interesting study from 2013, published in the European Journal of Applied Physiology, sheds some light on the matter. Here, the researchers recruited twenty-four males, all of whom were sports science students.

As a brief aside, the selection of 24 subjects here is good scientific practice; the authors calculated that in order to have sufficient statistical power to be able to determine whether there was a true difference between the different types of squats, they would need 20 subjects, and so they added four more to account for dropouts, which always happen. This is a cool lesson in good scientific practice; sports science is riddled with studies that lack sufficient statistical power to get accurate conclusions, and so determining the required sample size before undertaking a study makes good sense, and is deemed to be the gold standard practice. The flip side of this is the subjects were all university students, and one thing we know is that university students may not adapt to training in the same way as elite athletes—but that elite athletes are, in turn, hard to recruit to training studies. Furthermore, subjects were excluded from this study is they had squatted more than once a week in the preceding 12 months, or if they were a power sport athlete. This means that the subjects are almost set up to see improvements from squat training; on the one hand, this is good, as it means you will get some good scientific results, but on the other hand, it’s not necessarily representative of what would happen with athletes.

Anyway, back to the study: the subjects all followed a one-week familiarization training program, after which they underwent 1RM back squat testing. The subjects were then paired up with someone of a similar strength score, and then each person within the pair was randomized into either a deep squat or a shallow squat training program. The training program itself was comprised of three training sessions per week for 12 weeks. The shallow squat training group squatted to 60° knee flexion, whilst the deep squat group squatted to 120° knee flexion. The two groups followed the same set and rep scheme (Monday 3 x 10 RM, progressing to 3 x 6 RM; Wednesday 3 x 8 or 3 x 10 submaximally; and Friday 4 x 5 RM, progressing to 5 x 3 RM). The main aim of the researchers was to determine whether deep and shallow squats led to different adaptations in quadricep muscle size, patellar tendon size, squat performance, and jump performance.

So what does this all mean? Firstly, any form of squat training will make you better at squats and countermovement jumps. Deep squats will make you better at deep squats and CMJ to a greater extent than shallow squats, and lead to improvements in squat jump and quadricep musculature; the shallow squat won’t. As such, if you have the option, you should probably deep squat, particularly if improvements in vertical jump related tasks are important to you. That said, if you can only shallow squat, this will still lead to improvements; but likely not as much as if you can deep squat. This could be useful if you’re rehabilitating a patella tendon injury, for example; here, shallow squats, which may be better tolerated in the early stages due to the decreased range of motion, will allow similar tendon adaptations to the deep squat, and also some general strength improvements – potentially worth keeping in mind. However, for most people, most of the time, it seems like deep squats are likely more optimal.