Every month we take a deep dive into the latest research in sports science. Recently the countermovement jump has morphed from a test of explosiveness into a more general test of the athlete’s physical state.  In the May Sports Science Monthly we start off by looking at whether research backs this up. We then give you the latest updates on research about sleep, tapering, priming, transfer of training, and hamstring injuries. 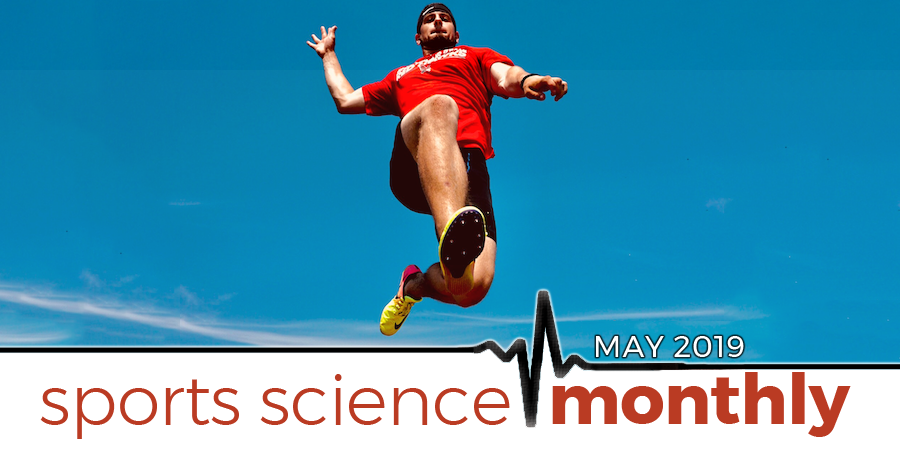 Jump height as an indicator of fatigue

» Quick summary: Countermovement jump height is a reliable indicator of fatigue during a sprint session, and so potentially represents a viable method of quantifying fatigue during sprint training.

As the sports science world is getting increasingly interested in the monitoring of load and performance—partially driven by improvements in technology—there is an increased importance in producing valid and reliable ways to measure the metrics we’re interested in. Reliability refers to the stability of the test measurement; if you were to do the test twice in quick succession, would you get the same results if the athlete exerted the same effort? This is important, because if a test is unreliable—i.e. you get widely different results each time your athlete undertakes the test—then you can’t really pick up on the signals you’re interested in; instead, you just get “noise”. Validity refers to whether the test actually tests what it purports to test. This is important, because if you want to measure metric A, but the test you’re interested in measures metric B, then you don’t actually understand metric A at all. A simple example would be using a 20m sprint test to measure acceleration; this is valid if the timing starts when the athlete begins their run, but becomes less valid the longer the “run-in” distance of the athlete, to the point where it measures maximum velocity as opposed to acceleration.

One area of measurement that is becoming increasingly important is that of fatigue quantification. We know that understanding and quantifying fatigue is important; the more fatigued you are, the higher your risk of injury, both acutely (i.e. within that session), and chronically (i.e. over the course of a training block, based around the acute : chronic workload ratio). What we need, therefore, is a valid and reliable way to quantify this fatigue.

This is where the first paper we take a look at this month comes in. Here, researchers recruited nine male athletes, with 100m best times ranging from 10.29 (high-level) to 11.17; seven of the athletes had best times of under 11 seconds, so we could class them as decent sprinters, and certainly better than most team sport athletes. The athletes undertook a 60m sprint session; each sprint was carried out at maximum velocity, with 6 minutes recovery between the sprints. The sprint session stopped when the athlete’s sprint performance decreased by 3% from the best time recorded within that session – so if your best time was 7 seconds, the session would stop if you recorded 7.21 seconds on a sprint. 10 seconds after each sprint, the athletes carried out a countermovement jump (CMJ), which has previously been used as a method to quantify fatigue in team sport athletes. A minute later, blood was taken from the athletes and used to quantify biomarkers typically associated with fatigue, such as blood lactate.

The results showed something quite interesting; there was a very strong correlation (r = 0.91, which is classed as “almost perfect”) between loss of CMJ height and increases in blood lactate. There was also a strong correlation (r = 0.76) between CMJ height loss and reduction in sprint velocity. Finally, there was also a strong (r = 0.83) relationship between increases in blood lactate, and a reduction in sprint speed. This tells us that blood lactate measurements are a decent method to quantify fatigue within sprint sessions, and that, in turn, determining reduction in CMJ height is a good way to predict blood lactate concentrations. This latter point is important, because it far easier and cheaper to test CMJ height than it is to measure blood lactate concentrations. There is further good news, because CMJ can be reasonably accurately determined via a smartphone app. For example, myJump has been validated via peer-reviewed research, and hence appears to be a potentially useful tool in this area. So, if measuring fatigue within sprint-based training session is important to you—perhaps you want to better understand the neuromuscular demands of some of your training sessions—then monitoring loss in CMJ height appears to be a decent way of doing this. In this study, a 16% loss in CMJ height (e.g. a change from 45cm at baseline to around 38cm) was indicative of a large increase in blood lactate, and was the value associated with a 3% loss in sprint velocity.