Every month we take a deep dive into the latest research in sports science. In the September Sports Science Monthly we look at the continuing debate on periodization and whether periodization is more effective than simply adding variation in training. We they dive into diverse topics such as injury risk, stress for university athletes, genetics, the effect of training time on strength adaptations, and more. 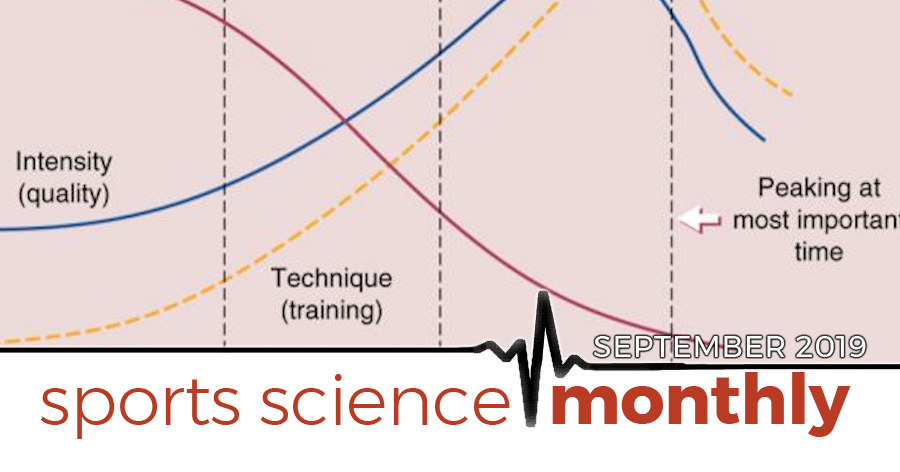 Separating the effects of periodization and variation

» Quick summary: Periodization theory has been garnering a lot of attention recently, with some significant questions around its scientific origins being questioned. At this point, it is unclear whether periodization is different to variation; this study examined the original studies exploring periodization, and found that the authors rarely controlled for variation – a significant methodological oversight which hampers our understanding of the true value of periodization.

Training periodization is a model that is taught across all manner of exercise science and coaching programs around the world. In an area of often shifting information and various shades of grey, there is one main constant – that training needs to vary in order to drive adaptation. That is the underlying principle of periodization—at least in my understanding—and yet it often becomes overly complex, with a huge variety of periodization techniques and models becoming popularized. The underlying scientific principles of the concept of periodization have been well explored, and skeptically examined, by John Kiely in his 2017 paper Periodization Theory: Confronting an inconvenient truth. In his paper, Kiely writes that the stress model of Selye, upon which conventional periodization theory is based, is insufficient to explain the human stress response, and hence adaptation, in part because stress is not merely physical, but also psychological. This increased interest in exploring what periodization means, and how it should be utilized, was more widely explored in a paper published last year, titled An integrated, multifactorial approach to periodization for optimal performance in individual and team sports, authored by a host of leading researchers.

At this point, we aren’t sure whether complex periodized training plans are more effective than just training variation. What is almost certainly the case is that a highly prescriptive periodization model is likely ineffective at worst, and sub-optimal at best. In a recent review article, Vladimer Issurin, a firm proponent of a type of periodization training called “block periodization” explored the evidence in support of such an approach. Block periodization requires the concentration of training to focus on the development of a specific ability, as opposed to the more typical, broader approach, which is to work many abilities all at once. Issurin suggests that such an approach is optimal for high-level, well trained athletes, as it increases the adaptive stimulus and reduces competitive stimuli. In his review, Issurin purported to review studies demonstrating the superiority of block periodization. However, as John Kiely, Israel Halperin, and myself pointed out in a letter to the editor, instead of showing this, Issurin often just actually compares block periodized training to an athletes standard, constant training program; i.e. he compares variety to non-variety. This makes it difficult to draw firm conclusions regarding the superiority, or otherwise, of any type of periodization approach. If we know that variation can improve the training stimulus, and we compare variation vs non-variation, then we’re testing the effects of variation, and not periodization, on exercise adaptation within these studies.

This all means that we’re not really any clearer as to whether periodized models are more effective that simple variation in training. This is because of study design; studies aiming to explore this question isolate variation, and use this as a proxy for periodization, when the two aren’t the same. This means that we can’t say for certain whether periodization works per se (although it seems logical that it does), and we can’t compare different periodization models for their effectiveness. The main outcome proposed by the authors of the meta-analysis is to explore whether periodized training programs are superior to varied training programs; this current oversight is severely limiting our ability to accurately determine the effectiveness—or otherwise—or various periodization models. We need better research, which will then hopefully be able to better inform our design of training programs.