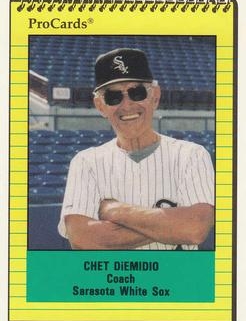 I received word on Saturday that Chet Diemidio, a great friend and coach had passed way. Fortunately, I was able to speak to him last Wednesday. I called him from Zurich Switzerland because I got word, he did not have many days left. His last words to me were “I love you.” Chet was an amazing man. He started coaching with the White Sox the same year I did in 1987 after a career as a Philadelphia policeman. He continued to coach up to four years ago when he was well into his eighties. Chet would get the complex between 4:30 and 5:00 am every morning to workout. He had a strict routine that he followed accompanied by the songs of Frank Sinatra played on a cassette tape recorder. 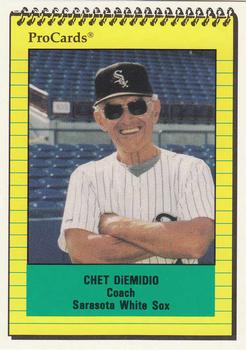 He was a great coach and I do not use the term great frequently. He was knowledgeable about the sport of baseball, schooled and grounded in fundamentals. Just like any great coach he was a great communicator, patient and selfless. He would work one on one with a player to get them better no matter if they were a first-round draft pick or fiftieth. His signature became the baby carrots he had in a small plastic bag in back pocket that he would give to the players, along with a handy pat on the back. He was a big supporter of the conditioning program at a time when what we did was out of the norm in baseball.

I loved being around Chet. He was always so positive and uplifting. I never heard him raise his voice or speak ill of anyone. After I left the White Sox, I would visit him at various times in Philly, that was always the highlight of my trips to the northeast.

He influenced many generations of young White Sox players. Only a small number of whom made it to the big leagues, but Chet helped them all become big league people. Chet, we miss you already. The world is a better place because of you, and I am eternally grateful for your friendship and that smile to start our days with the White Sox. Chet, I love you – RIP.